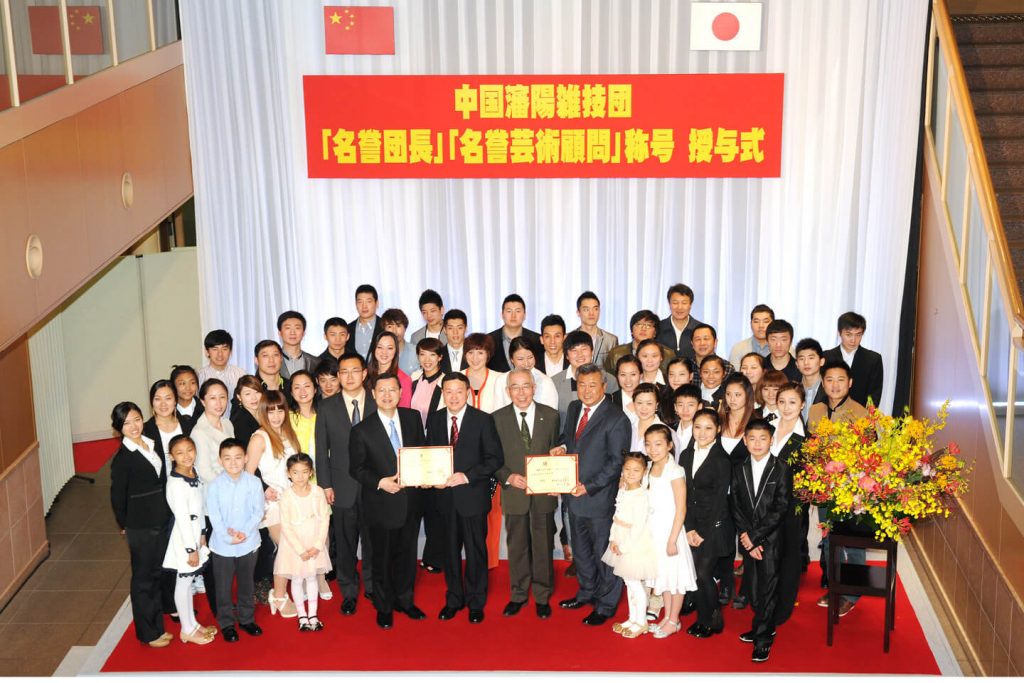 On April 1, in the middle of the Japan tour, Mr. Ma Xiaoming, director of the Cultural Exchange Department of the Chinese People’s Association for Friendship with Foreign Countries, accompanied by one of the tour directors Mr. An Ning, as well as members of the Shenyang Acrobatic Troupe of China, visited the Min-On Culture Center in Tokyo to present the title of Honorary Director of the Troupe to Min-On founder Dr. Daisaku Ikeda, as well as the title of Honorary Artistic Advisor to the founder’s wife, Mrs. Kaneko Ikeda. The presentation ceremony was held in Melody Hall, located within the Min-On Music Museum.

In attendance was Mr. Hiromasa Ikeda, Soka Gakkai Vice General Director, on behalf of his parents, Min-On President Hiroyasu Kobayashi, as well as staff and representatives of the membership. Official certificates of citation and commemorative gifts from the Troupe were presented during the ceremony. The acceptance message from the Min-On founder, read by Mr. Hiromasa Ikeda, took the form of a Chinese poem conveying his appreciation for the honorary title. He went on to praise the troupe’s consistent and dedicated efforts toward global peace, an aim that was encouraged by the late Chinese Premier Zhou Enlai.

After listening to the message, the Troupe members applauded warmly with smiles and pride evident in their faces.