Ghana Dance Ensemble Takes Audience on a Voyage of Discovery 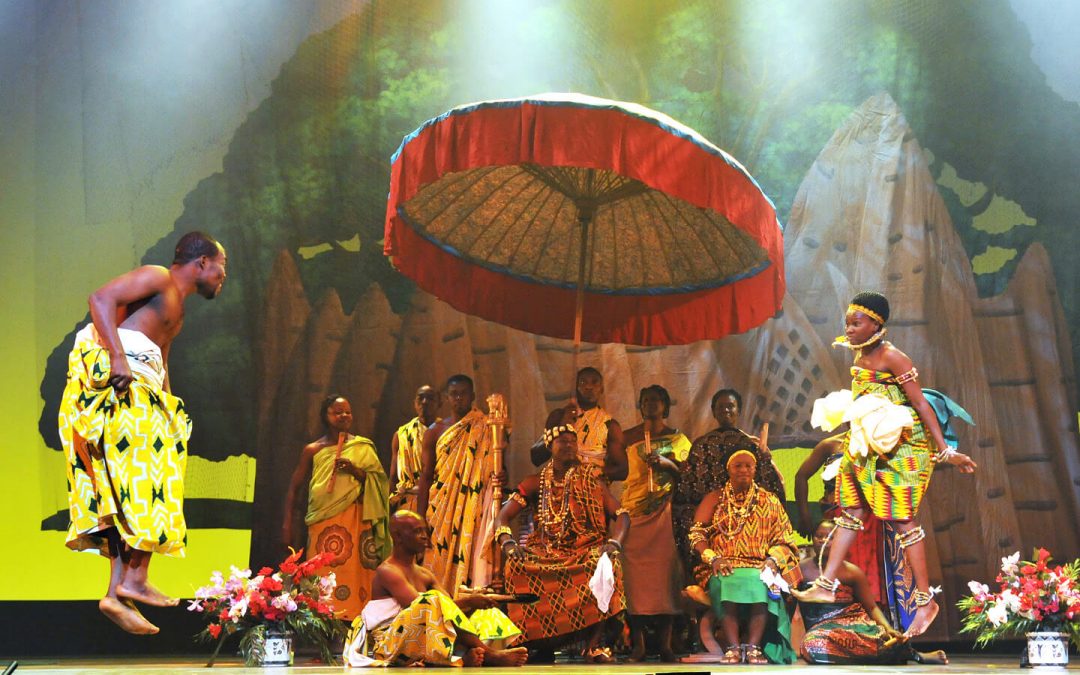 A Musical Voyage Across Africa is a concert series initiated by the Min-On Concert Association in 1999 and based on the idea that the 21st century shall be the ‘Century of Africa’. Aiming to develop friendships with various African countries and contributing to the realization of the African Century, Min-On has to date introduced and celebrated a variety of rich musical cultures unique to the countries of Africa, each of which has its own distinctive ethnic and tribal heritage of songs and dances.

Jira—a traditional dance of hunters from the Northern Region

This year, commemorating the 55th anniversary of the Republic of Ghana’s independence, Min-On invited the internationally acclaimed Ghana Dance Ensemble to present the seventh installment of A Musical Voyage across Africa series. On August 20, the 19-city Japan tour—the Ensemble’s first—kicked off in the northern city of Sapporo, Hokkaido. After traversing the country from north to south, the tour concluded with splendid success at the city of Nasu-Shiobara in Tochigi prefecture on September 15.

On the evening of September 13, toward the end of their musical voyage in Japan, the Ensemble took to the stage of Nakano Sun Plaza Hall for their Tokyo premiere, an event that was enjoyed by a capacity audience that included Ghanaian ambassador Dr. William G. M. Brandful, as well as many other ambassadors and diplomats from 21 countries. The Ensemble’s performance featured a wide range of music and dance from the Republic of Ghana, and included a medley of songs and dances unique to various ethnic groups and regions. For example, Ahengoro, which means “music of loyalty,” was performed at the beginning of the show. It is an expression of loyalty to local dignitaries or chiefs at ceremonial events among the ethnic Akans in the Southern Region of Ghana. Atsea is a dance that brings youth together at social events for celebrations throughout Ghana, while Jira is a dance characteristic of Islamic hunters from the Ghana’s Northern Region. A total of more than a dozen styles of ethnic songs and dances were performed as a medley in two parts, and during the finale, the entire Ensemble performed a medley from their repertoire of original modern African dances known as Soleokor, with acrobatic movements redolent of the spirit of Africa drawing enthusiastic and extended applause.

At a commemorative reception held immediately after the performance, the ambassadors and distinguished guests from various countries, together with the members of the Ghana Dance Ensemble, celebrated the magnificent cultural flowers that bloomed onstage for the African Century.