Min-On Music Journey No. 24: The Republic of Lithuania 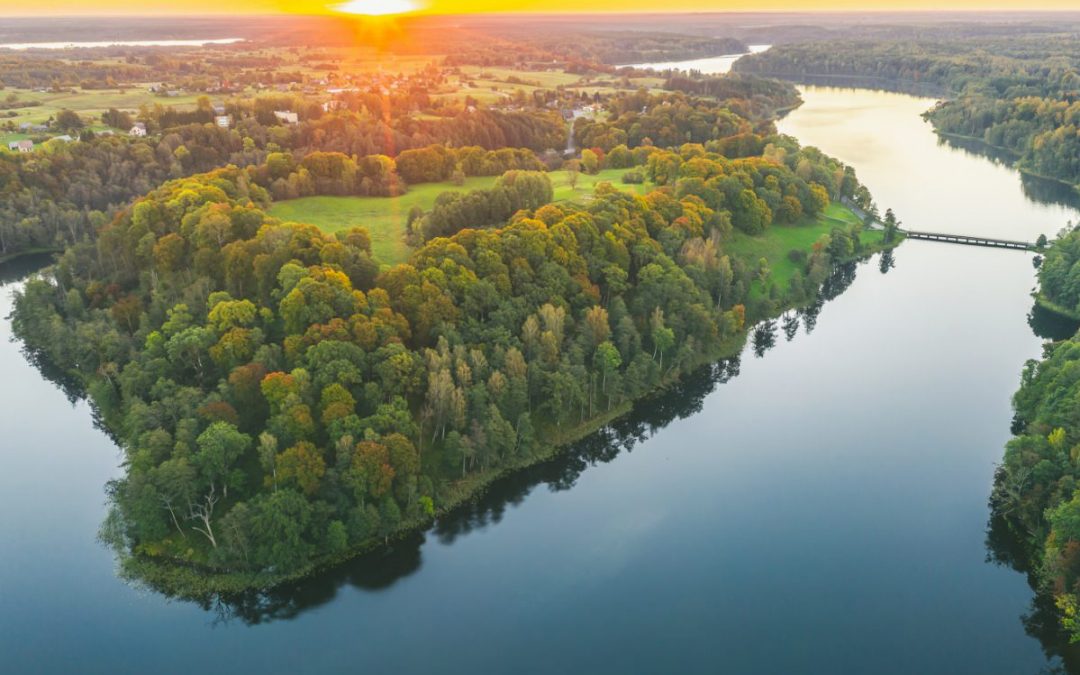 Welcome to Min-On’s Music Journey. Today, the Min-On Concert Association and the Embassy of the Republic of Lithuania to Japan welcome you to Lithuania on the eastern shores of the Baltic Sea.

February 16 is the Day of Restoration of the State of Lithuania. In celebration, we would like to begin with a message from Ambassador Gediminas Varvuolis and a performance of the Lithuanian national anthem by Lithuanian musicians currently living in Japan.

*Japanese subtitles can be turned on using the settings in YouTube.

“The National Hymn (Tautiška Giesmė),” the national anthem of Lithuania

Lithuania is the southernmost of the three Baltic States and shares a border with Poland, Latvia and Belarus. The country is blessed with a rich natural environment including nearly 4,000 lakes, and forests and farmland comprise up to 98% of its land area, leading to its fame as a country of beautiful forests and lakes. After the local currency changed to the Euro in 2015, it has increased in popularity as tourist destination for European travelers.

The capital of Vilnius, alive with medieval history 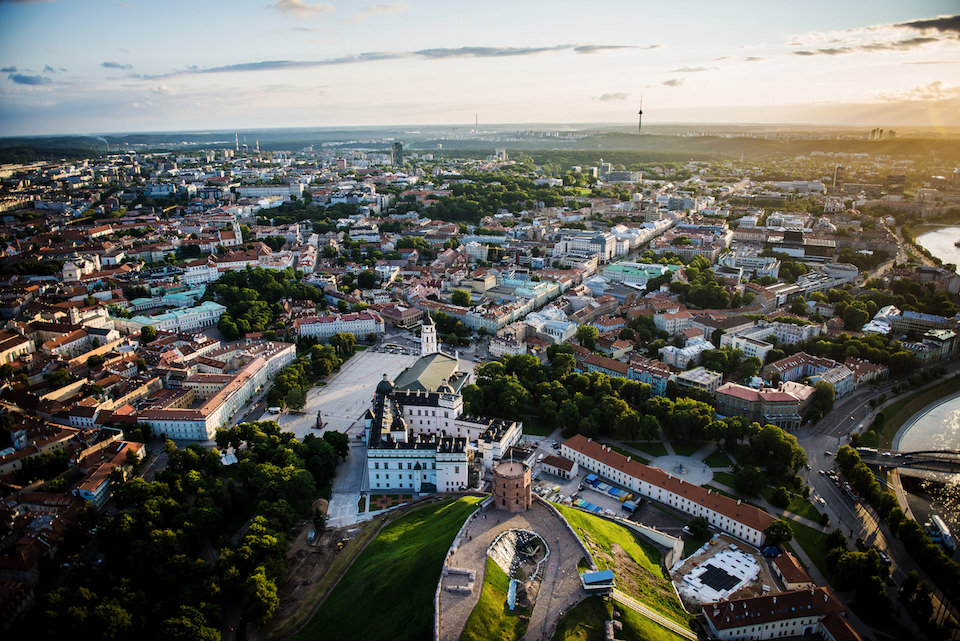 The capital of Lithuania was founded in the 14th century. Diverse ethnic groups, religions and cultures coexist in the Old Town of Vilnius, one of the largest medieval cities in Europe, featuring narrow cobblestone streets that wind together like a maze. The Vilnius Historic Centre was registered as a World Heritage Site in 1994 due to the Baroque, Gothic and Renaissance architecture that still stand there today. In particular, the percentage of the area occupied by buildings related to the Christian faith is said be the highest of all cities in Europe. Of special note is St. Anne’s Church, a religious structure built with 33 different types of bricks. Napoleon Bonaparte was so moved by the beauty of the church that some say he remarked, “I wish I could carry it back to France.” 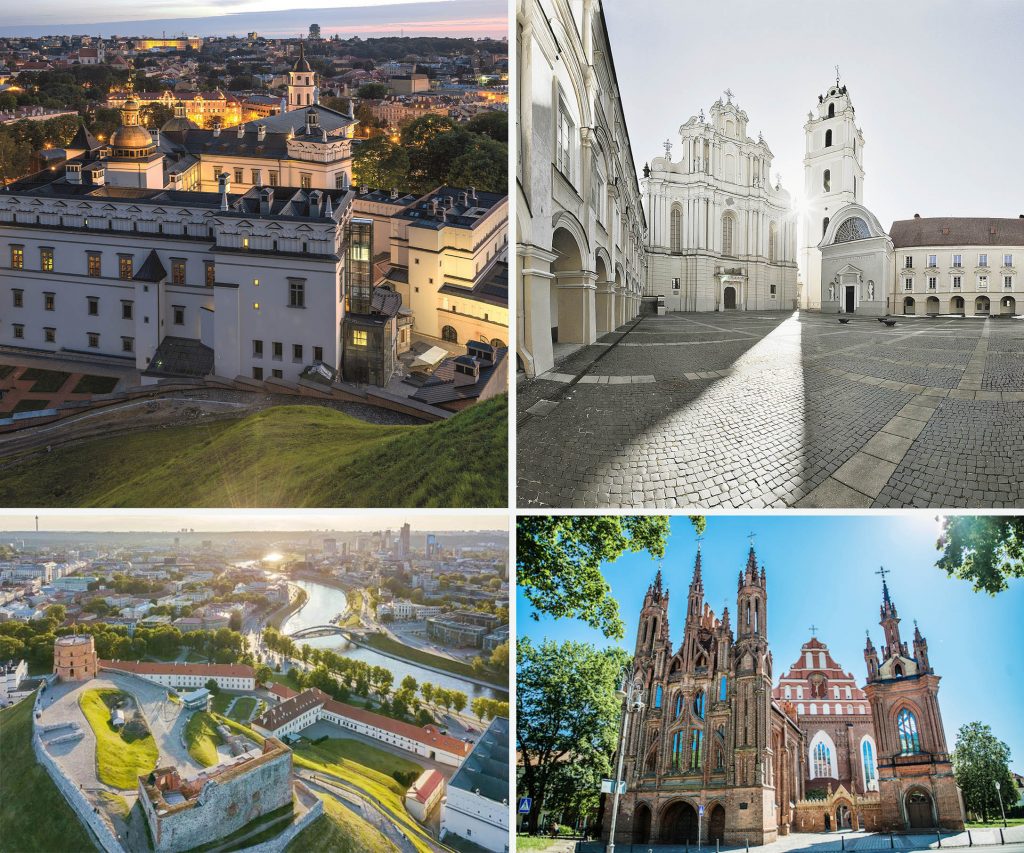 The historic architecture of the Old Town of Vilnius 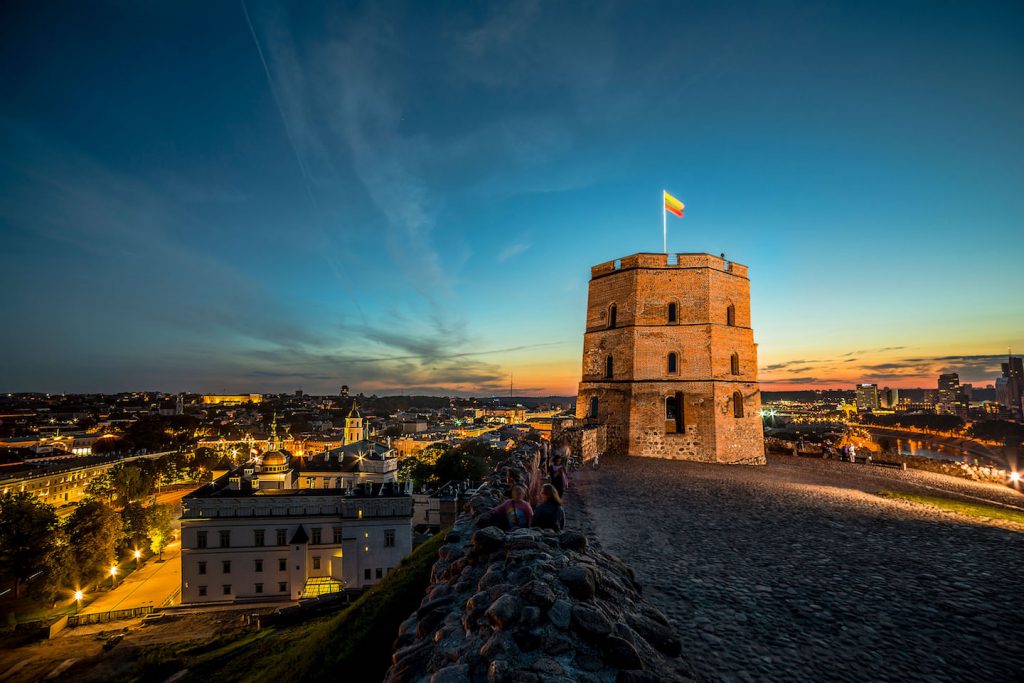 Gediminas’ Tower, a symbol of the city

Gediminas’ Hill lies on the banks of the Neris River that flows through the capital. Here, the Grand Duke of the former Grand Duchy of Lithuania decided to build his castle, the purported origin of the city of Vilnius. Gediminas’ Tower stands on top of the hill, and today it’s been converted to a history museum that exhibits knights’ armor and cannons. Visitors can also enjoy a panoramic view of the historic city from the tower roof.

Vilnius TV tower was completed in 1980 and is 327 meters tall, making it the tallest building in Lithuania. Visitors can enjoy a stunning 360-degree view of the Vilnius suburbs and neighboring countryside from its rotating observation deck. The tower transmits TV and radio signals and on special occasions has color illumination at night. 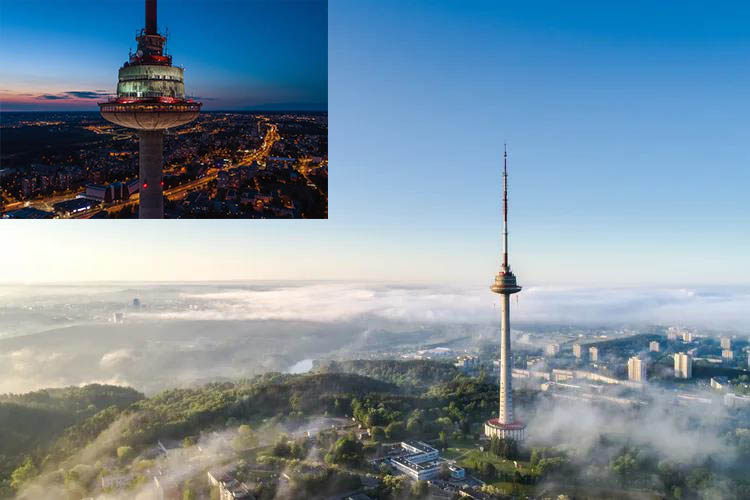 The state-of-the-art MO Museum was designed by architect Daniel Libeskind. The building has been praised as a work of contemporary art, winning many architecture awards. It houses the works of contemporary Lithuanian artists and attracts the attention of many modern art enthusiasts. Kaunas is Lithuania’s second largest city located in the middle of the country, with many historic buildings and impressive modernist architecture. The Nemunas and Neris Rivers converge in the historic district where Kaunas Castle has playing an active role in defending the city since the 13th century. The newer area of the city is home to St. Michael the Archangel’s Church, built in the 19th century and known for its iconic round arches. Laisvės Alley stretches through both the old and new quarters and is lined with countless cafés, restaurants, boutiques and trendy shops. 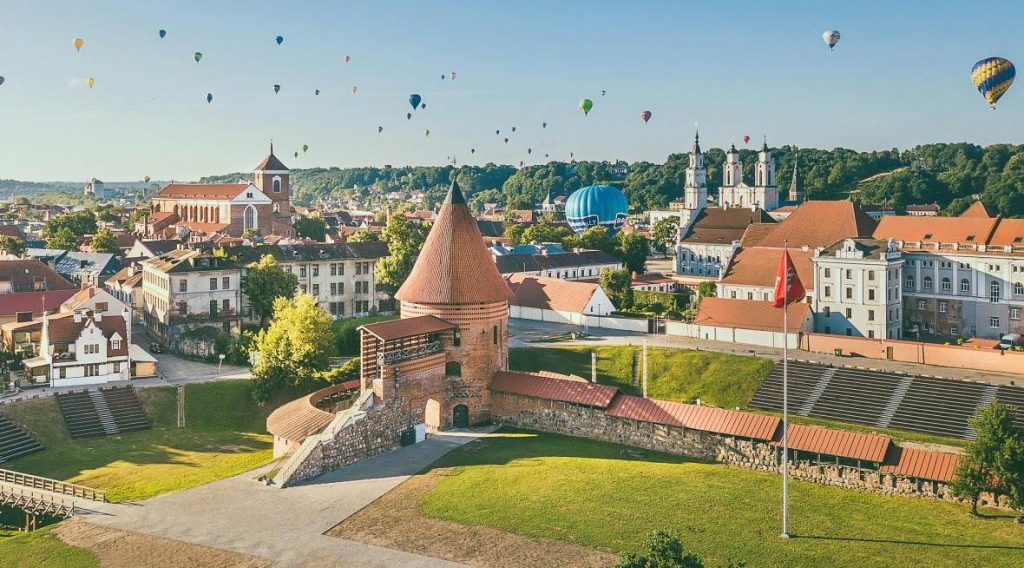 The Town Hall of Kaunas (left) and Laisvės Alley (right)

Kaunas is famous as the place where the Japanese diplomat Chiune Sugihara was stationed in 1939-1940 and issued “visas for life.” He acted bravely on his own authority and issued visas for Japan to Jewish war refugees, thus saving more than 6,000 human lives from the Holocaust. The building that served as the Japanese consulate during that era is now open to the public as a museum highlighting his noble actions, and is called Sugihara House. In 2020, Kaunas hosted an international conference to commemorate the 80-th anniversary of issuance of Sugihara’s “visas for life.” The ancient city of Trakai, located fairly close to the capital of Vilnius, still retains vestiges of its time as Lithuania’s capital in the 14th century. Trakai Castle is built on one of the islands in the tranquil Lake Galvė and features a stunning red tile roof and red brick walls. The beautiful scenery of the castle reflected in the surface of the lake entices many tourists here. Visitors can cross the bridge to reach the castle and explore its interior, which is now a museum. The Curonian Spit (that includes the municipality of Neringa) spans about 98 kilometers from Klaipėda, a city in western Lithuania on the Baltic Sea, to the Russian exclave of Kaliningrad Oblast. This long, narrow, gently curved sandbar separates the Baltic Sea from the Curonian Lagoon. In the summer season, many tourists from neighboring countries travel here to visit its beautiful sandy beaches. According to legend, this unusual sandbar was created by Neringa, a courageous giantess of Baltic mythology. The Curonian Spit sandbar was registered as a World Cultural Heritage Site in 2000. 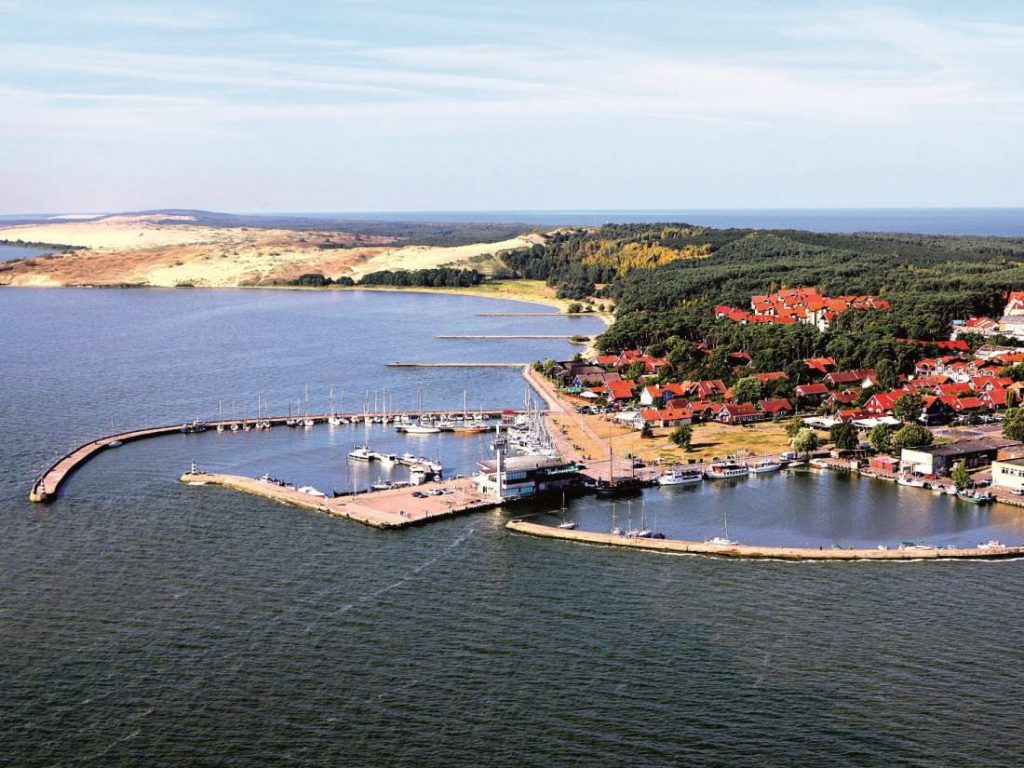 The staple food of Lithuania is dark rye bread, potato dishes, meat and dairy products, including cheese. Cepelinai, made of a sticky potato dough filled with minced pork, are named after the famous airship developed by the German Count Zeppelin, which also resembles their shape. A common summer dish is a cold beetroot soup. This staple of Lithuanian home cooking is often eaten with potatoes or hard-boiled eggs. Šakotis, which means “branched tree,” is a Lithuanian cake that has been passed down through many generations. It is cooked by pouring batter onto an iron rod as it rotates over a fire, and starkly resembles a tall tree with countless branches. 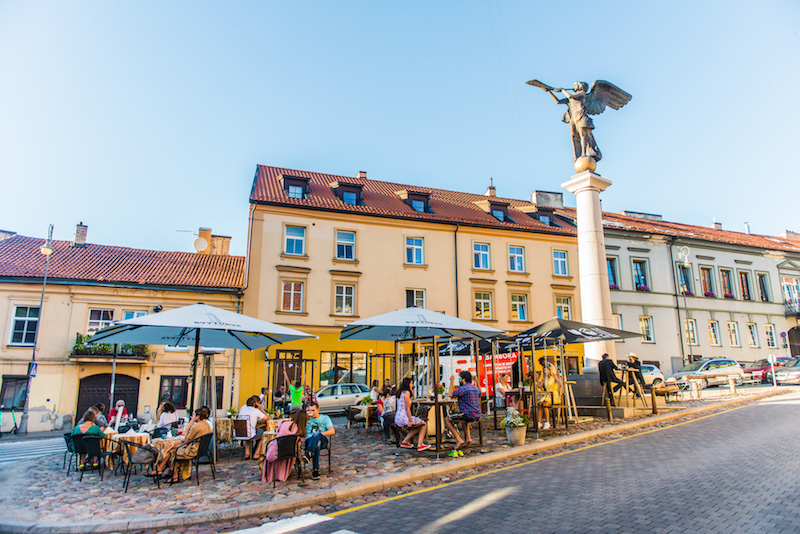 Lithuania’s largest event, held once every four years, is called Dainų šventė (dainų meaning “song,” and šventė, “festival”). The festival lasts an entire week and it was registered in the UNESCO Intangible Cultural Heritage List in 2003. In 2018, the festival was held as a celebration of the 100th anniversary of Lithuania’s independence, and 36,000 people participated, including a Japanese choir group. The traditional Lithuanian kanklės is a plucked string instrument made of 12 metal strings stretched over a flat sound box. This instrument is thought to have existed since before the birth of Christ. There are similar instruments in many other countries along the coast of the Baltic Sea and in Northern Europe, all known by different names.

In October 1976, The Lithuanian Dance Ensemble “Lietuva” performed in Japan by invitation of Min-On. Next, we would like to introduce musicians recommended by the Embassy of the Republic of Lithuania to Japan. First, please enjoy two pieces from Jauna Muzika, a group scheduled to perform in Japan next year in 2022.

The Jauna Muzika choir, founded in 1989, is a chamber choir led by conductor and composer Vaclovas Augustinas.

They have performed in over 60 concerts domestically and abroad, and are one of the most well-known and vocally skilled groups in Lithuania. The choir has also won 15 international choral competitions, in addition as the illustrious Grand Prix Europeo in the International Federation for Choral Music in Bulgaria in 1993. 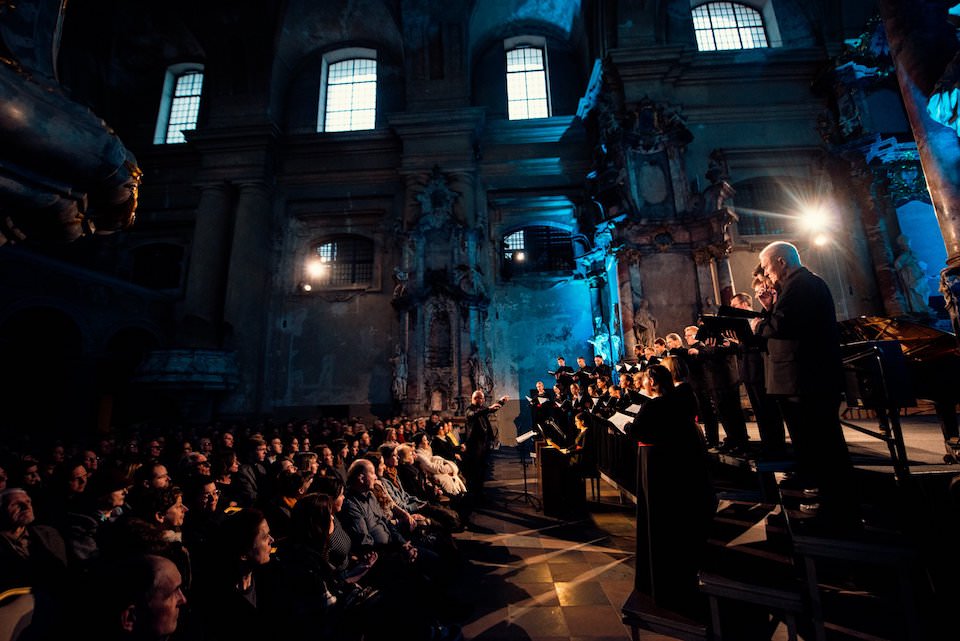 Vaclovas Augustinas – Darkness Is As Light to You

Next, please enjoy two pieces from NICO, a group scheduled to perform in Japan this year, 2021. NICO (New Ideas Chamber Orchestra) is a chamber ensemble founded by Lithuanian composer Gediminas Gelgotas. Their performances are brimming with originality, which has caught the attention of international media.

Lock Me In Your Light

In closing, please watch the following video that highlights two Japanese girls’ experience enjoying their holiday traveling throughout Lithuania, a country of beautiful forests and lakes.

What did you think of our journey to Lithuania? There are still many more places to go! Please look forward to our next destination.

(Produced in collaboration with the Embassy of the Republic of Lithuania to Japan and the Lithuanian National Tourism Office, which has also provided photos.)