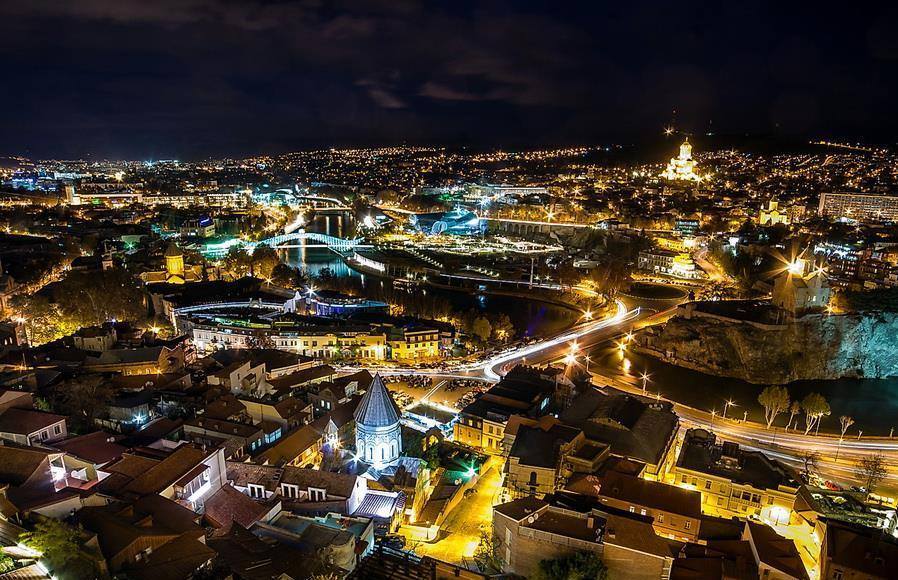 Welcome to Min-On’s Music Journey! Today the Min-On Concert Association and the Embassy of Georgia to Japan guide you today to the fascinating country of Georgia, found in the Caucasus region between the Black and Caspian Seas.Georgia was formerly known as the Georgian SSR during the Soviet era and is a crossroads of civilization between Europe and Asia.

Night view of the capital of Tbilisi

A few decades ago, the 1.8 million-year-old remains of the early Dmanisi hominins were unearthed in Georgia. This valuable discovery for human history served as evidence suggesting that humans migrated from the Africa continent to the European continent.

Georgia has shown striking economic growth in recent years, ranking 7th (as of 2020) in the Doing Business Ranking published each year by the World Bank Group.

The capital of Tbilisi, a historic city of hot springs

The city of Tbilisi was praised as picturesque by the Venetian merchant Marco Polo and has supported Georgia’s growth its founding in the 5th century. “Tbili” in the city’s name means “warm” in the Georgian language, indicative of the numerous hot springs in the area. According to legend, the king of the region chose to build a city here due to the powerful effects of these natural sulfuric hot springs. Since then, the city has developed into a bathhouse and spa resort town, with over 100 bathhouses and over 2,400 mineral water springs that contribute to its citizens’ livelihood. Marco Polo himself is said to have visited Tblisi’s central bathhouses, which remain popular tourist locations.

The Mother of Georgia statue towers atop Sololaki Hill, which also extends to the beautiful ruins of Narikala Fortress, built around the 4th century. The colossal, 20 meter-tall goddess statue holds a sword in her right hand and a cup of wine in her left, expressing the spirit of the Georgian people: “The sword for our enemies, and wine for our friends.” The statue can be seen from anywhere in the city, and is beloved by Georgians as the symbol of Tbilisi. The Bridge of Peace was completed in 2010 as a footbridge over the Mtkvari River connecting the historic and modern districts of the city. Its design resembles billowing waves and the panoramic views from the bridge have made it one of Tbilisi’s most popular new sightseeing destinations. 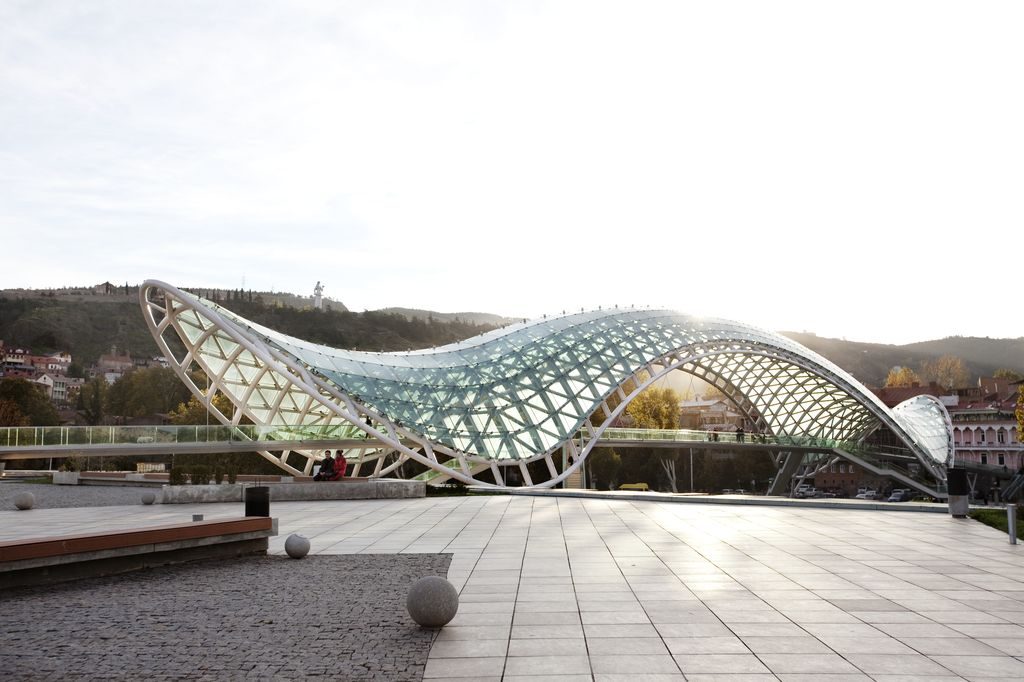 The Bridge of Peace

Georgia’s population is about 4.3 million, yet it attracts over 5 million tourists each year, earning it global attention as a tourism powerhouse. Just as the Georgian saying goes—”A guest is a gift from god”—Georgian people warmly welcome visitors from all over the world with cheerful hospitality.

Georgia is also popular among travelers looking for adventure and mystery in nature. The country is home to the Historical Monuments of Mtskheta and also the Upper Svaneti, a region inhabited by indigenous people, which were registered as World Heritage Sites in 1994 and 1996, respectively. New resorts have also opened in the country recently, and visitors to Georgia have a wealth of interesting locations to explore. 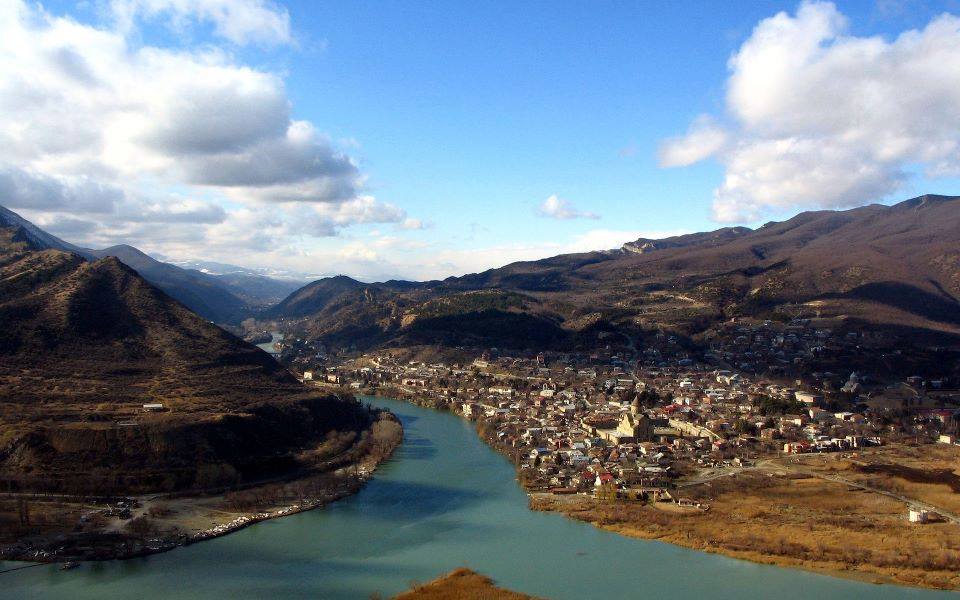 The Historical Monuments of Mtskheta

Winter sports in the mountains 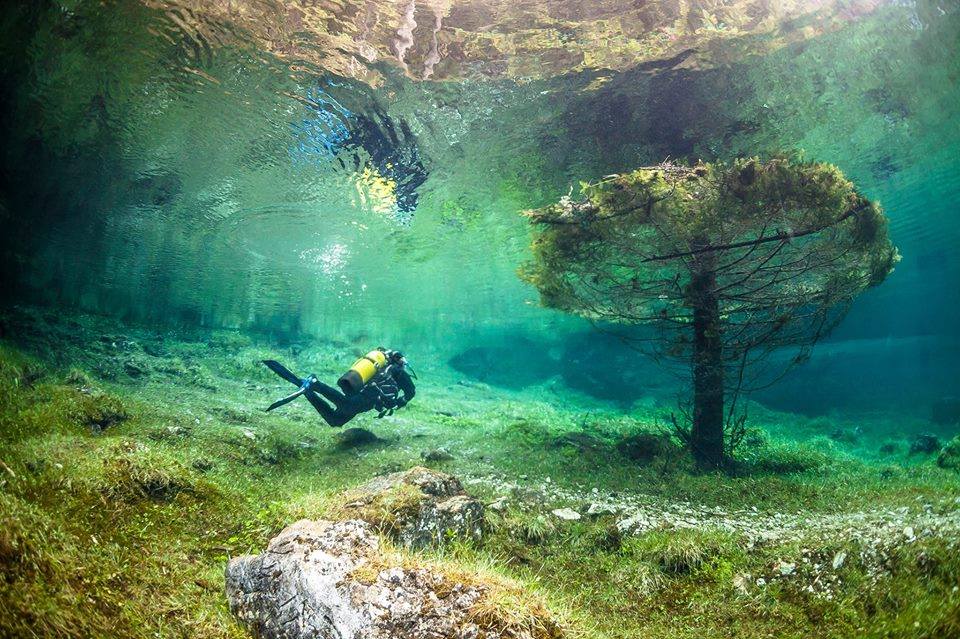 A restaurant and resort in Batumi

Georgia has a rich agricultural tradition and is blessed with a temperate climate and fertile soil. In particular, the country’s wine has over 8,000 years of history, and Georgia is known as the birthplace of wine. Georgian wine is produced using the traditional kvevri method, where large clay pots are buried in the ground where the wine ferments. This method was registered by UNESCO as World Intangible Cultural Heritage in 2013.

Traditional Georgian cuisine includes dishes such as shkmeruli, a chicken dish stewed in a white garlic and cheese sauce that is popular even in Japan, and others that vary by region, like khachapuri (cheese bread) and khinkali (Georgian dumplings). 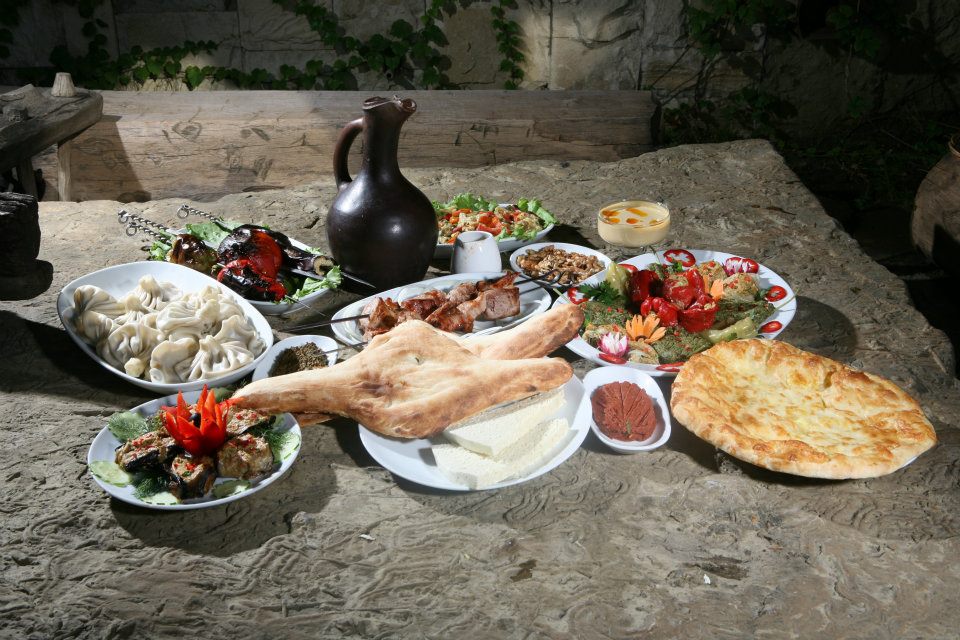 The musical culture and traditional dress of Georgia

Polyphony (polyphonic music), the music of the Caucasus mountains, is a traditional form of music passed down in Georgia from its beginnings in the first century BC. Its unique, peaceful harmonies have been preserved unchanged to the present day, and it was registered as an Intangible Cultural Heritage by UNESCO in 2001.

The civilizations of Europe and Asia converge in Georgia, and the country has been influenced by both the East and West. This can be in Georgian traditional clothing, including men’s traditional formal attire called chokha, which dates back to the 9th century and remains popular today. With a short sword worn at the belt and bandolier pockets at the chest, this dress garnered attention in Japan as the basis of military uniforms worn in the Ghibli film Nausicaä of the Valley of the Wind. Today, this attire is worn at special events including festivals and weddings.

In 2018, Min-On invited the Georgian State Academic Ensemble Rustavi to perform across Japan.  Since its founding in 1968, Rustavi has performed an incredible 5,000 times in over 80 countries. The men of the group leap and spin in midair to show their bravery, and the women, wearing traditional kaba dresses, stand tall and extend their arms to express elegance. Their concerts are renowned worldwide for skillfully combining traditional music that resonates deeply with incredible technique and an aura of mystery. 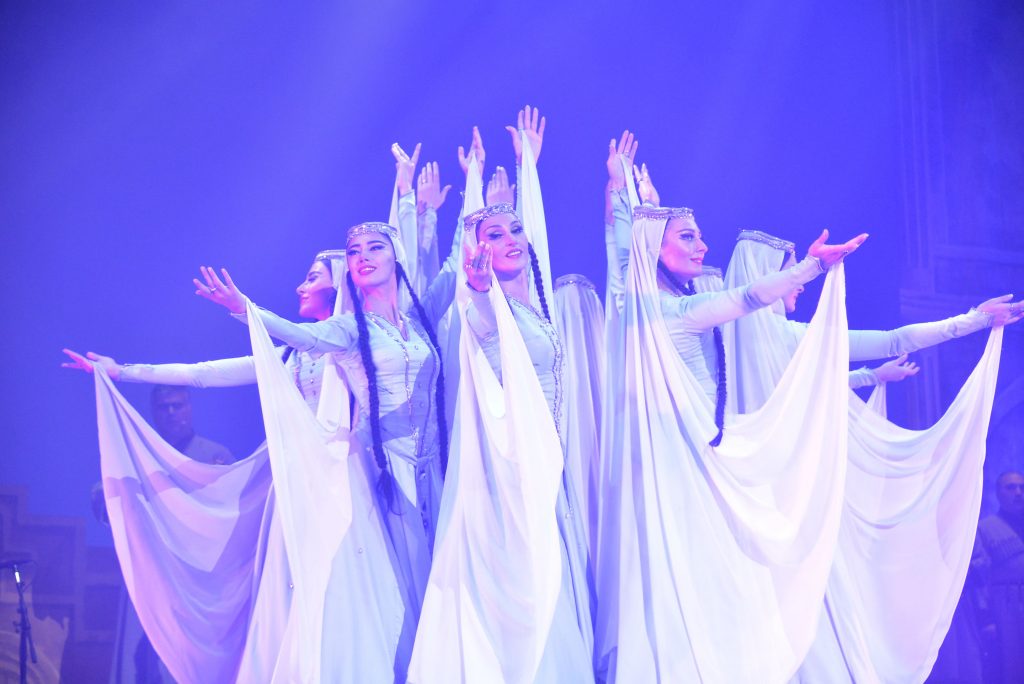 We would next like to feature three songs from that concert, “The Women’s Dance, Narnari”, “Charklo” and “Abkhazian Dance.”

“Narnari” means “beauty overflowing with grace” in Georgian. This dance expresses the tenderness and elegance of Georgian women.

This masterpiece of Georgian polyphony was sent into space by the US National Aeronautics and Space Administration (NASA) Voyager Program in 1977. It depicts the unbridled patriotic spirit of the Georgian people.

Abkhazia is a region located in northwestern Georgia. This dance is characterized by extremely fast and complex movements, including the dancers’ knees and deft tiptoeing.

Musicians recommended by the Embassy of Georgia to Japan

In closing, we would like to highlight the Sukhishvili Georgian National Ballet, which was recommended by the Embassy of Georgia to Japan.

The Sukhishvili Georgian National Ballet is a dance troupe founded in 1945 by ballet dancers Iliko Sukhishvili and Nino Ramishvili. They’ve toured across the globe and performed for over 90 million people to date. While fully displaying characteristic traits of classic ballet, the troupe adds modern elements to create inspired, new Georgian dances. Please enjoy the performances below.

This dance is performed against a backdrop of various Georgian cities.

This dance is centered on the life of Queen Tamar.

(Produced in collaboration with the Embassy of Georgia. Photos provided by the Georgian National Tourism Administration.)