An Evening with Young Korean and Japanese Traditional Musicians 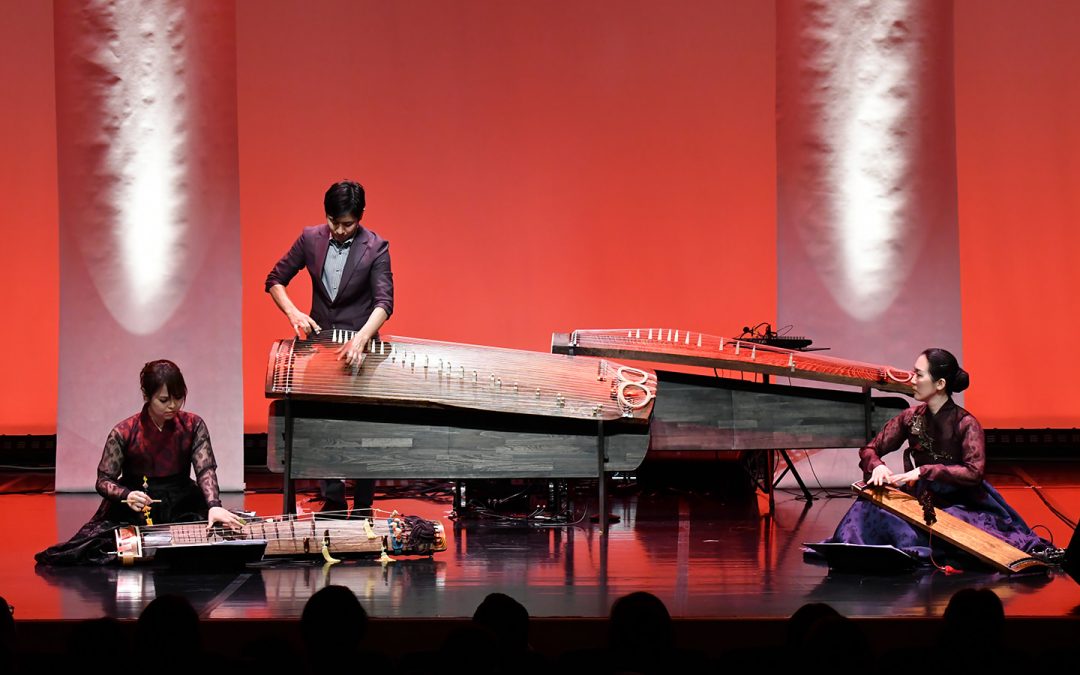 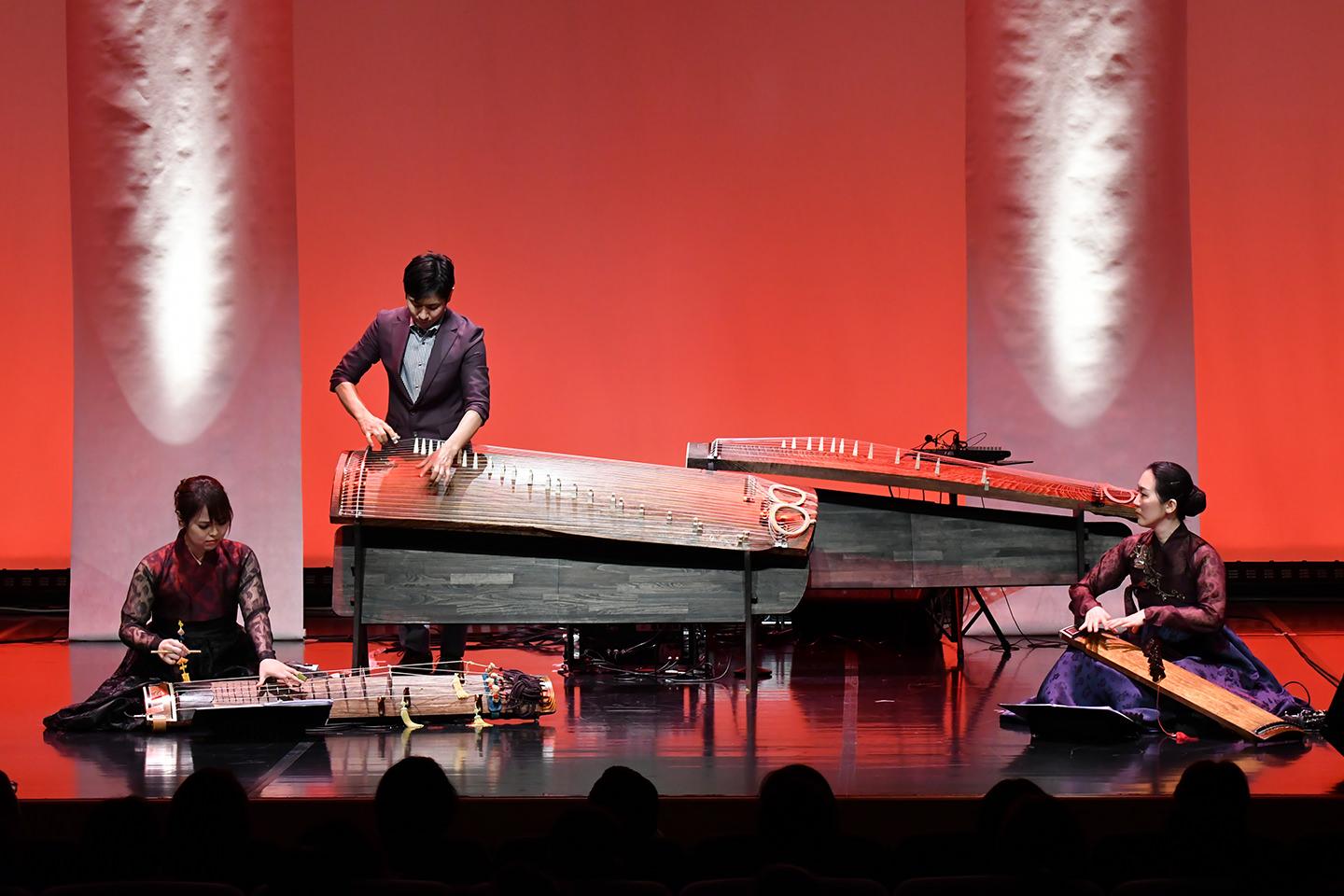 On February 19, 2020, a traditional music event featuring both Korean and Japanese artists was held at the Hanmadang Hall of the Korean Cultural Center in Tokyo.

The evening featured the dynamic sounds of the Korean geomungo and gayageum, traditional instruments that resemble the zither. The geomungo, which originally has 6 strings and can be played with both the hands and a pencil-like pick called a suldae, produces deeper bass tones and originated circa the 4th century. The gayageum, which traditionally has 12 strings and produces sounds reminiscent of both traditional Eurasian stringed instruments and the Appalachian banjo, originated in the 6th century.

The event began with two Korean female artists playing the geomungo and gayageum as a duet. Their first number, titled Walking on the Clouds, was a very traditional Korean arrangement that can last for up to one hour as a single performance. For the sake of the event, the two artists gave a rendition that was approximately 10 minutes long. 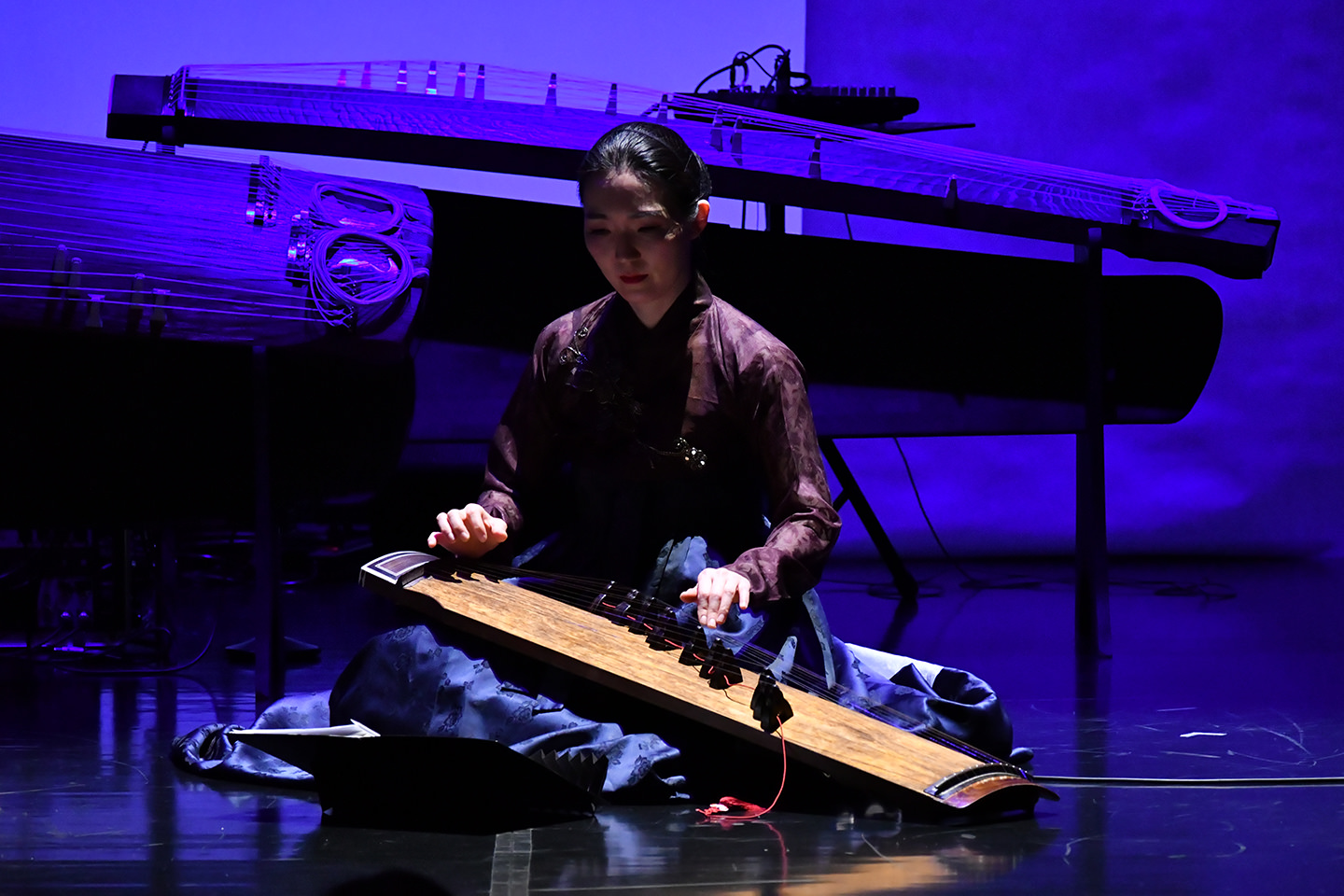 The second Korean number, a Sanjo Duet for Geomungo and Gayageum, showed a completely different side of the instrument, featuring bouncing, stilted and impactful melodies, showcasing both instruments’ capacity for vibrato by pushing on the strings of the long, wooden stringed instruments. 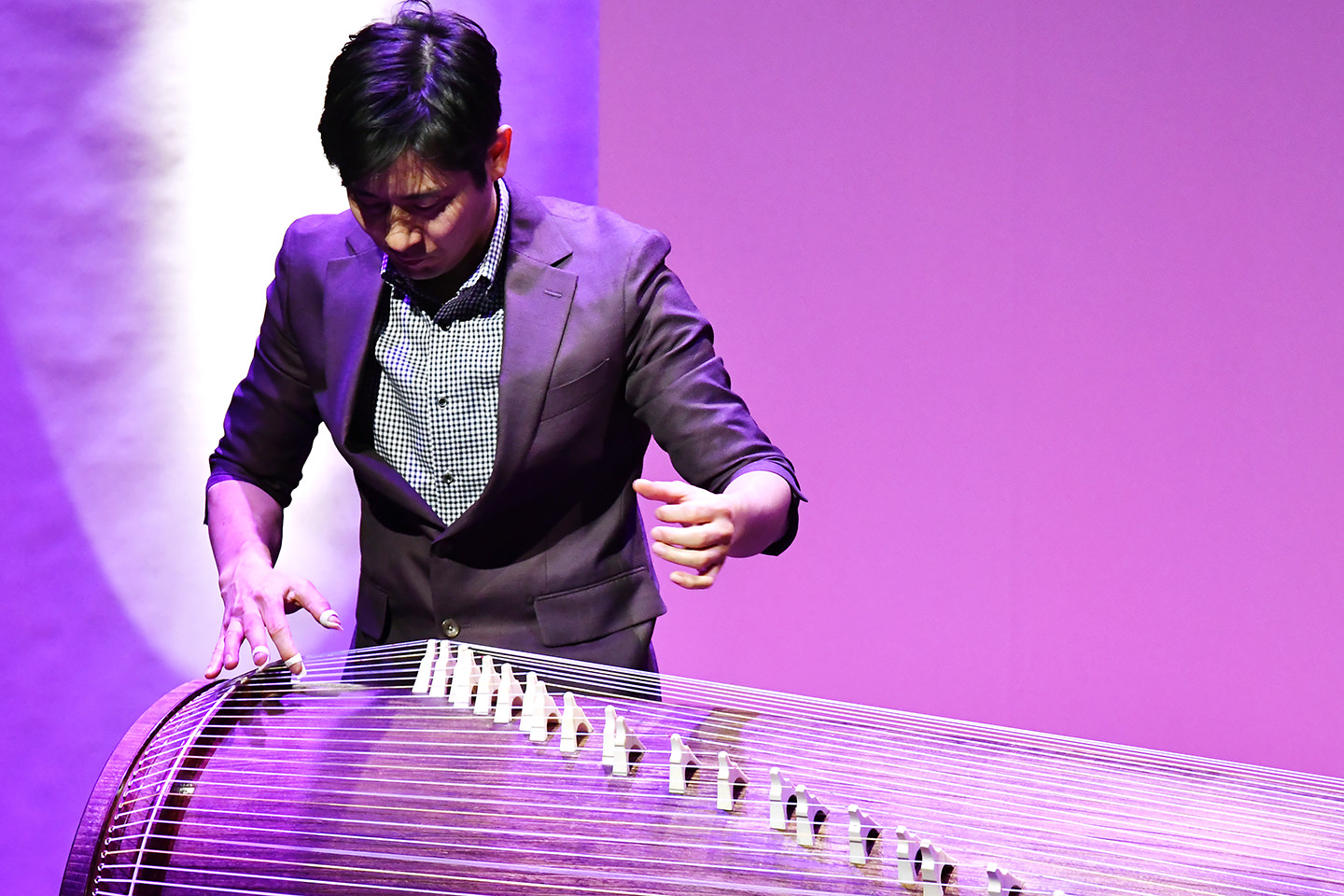 After showcasing the Korean performances, Mr. Tomoya Nakai took the stage, a Japanese koto artist and composer. In lieu of introducing the traditional koto, which has 13 strings and originated in the 7th century, Mr. Nakai brought out a 25-string koto. Incredibly, the 25-string koto was only invented approximately 30 years ago, after over 1,300 years of the original koto’s legacy.

Mr. Nakai showcased the powerful brilliance of the 25-string koto in his first number, Hana no you ni (“Reposed as a flower”). With 25 strings, the instrument requires sweeping movements to cover its large body and an incredible command of deft finger work to execute the song with precision. As with traditional koto playing, Mr. Nakai wore finger picks on the thumb, forefinger and middle finger of his left hand—used for intricate finger plucking, staccato finger work and powerful, sweeping strumming—and kept his left hand open for harmonious plucking and vibrato created by pushing on the strings. Any newcomer to the koto would be blown away by the virtuosic power of Mr. Nakai’s performance. 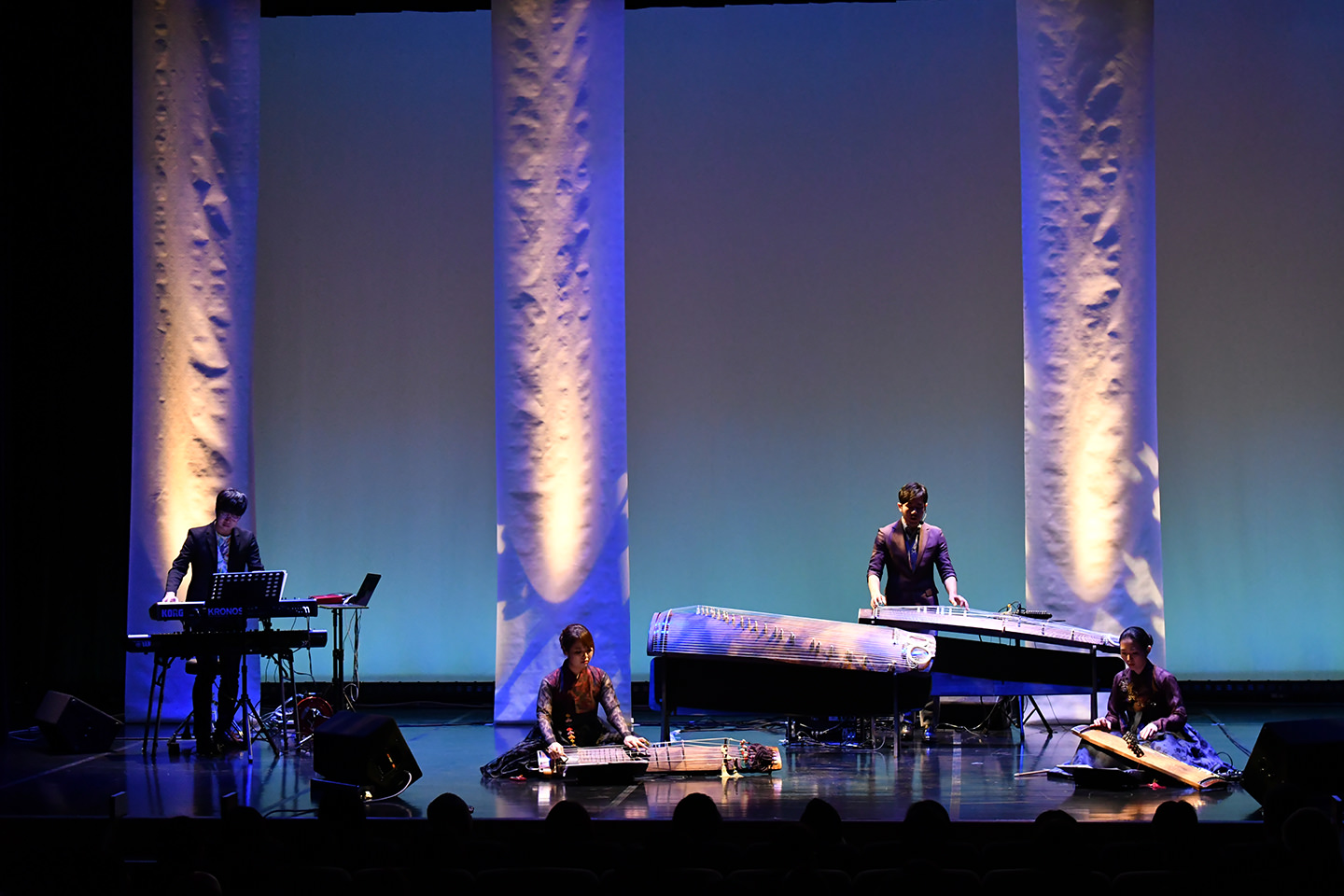 After another song by Mr. Nakai—this one more subdued and featuring enka-like folk vocals by Mr. Nakai—the two female Korean performers jointed him on stage for an ensemble of three songs. The most powerful collaboration was Deep Sea, a song by geomungo artist and composer Yu Mi Yong that featured an esoteric melody resembling “plankton drifting through the sea like cherry blossom petals,” traditional 13-string koto, geomungo, gayageum, keyboard instrumentation and spoken word.

An Evening with Young Korean and Japanese Traditional Musicians provided a deep window into the provocative and compelling world of Korean and Japanese traditional musicianship, forging even deeper bonds across both countries through profound cultural exchange. Thank you to all the artists and attendees for a special evening of musical wonder.