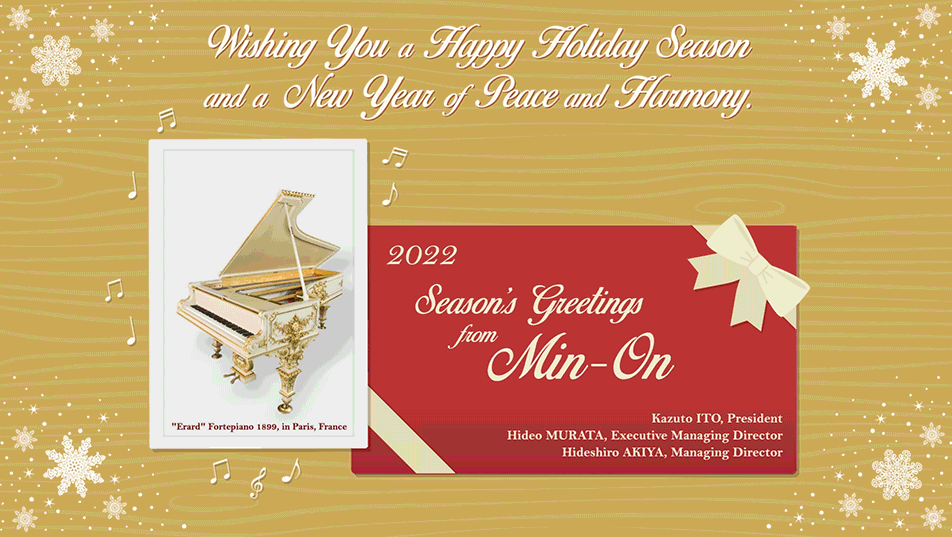 The Min-On Concert Association extends our warmest season’s greetings and very best wishes for the New Year. Thank you for your support and patronage throughout 2022.

2022 was fraught with challenges, both global and local, yet it was also a year in which our association forged on to notable success. We, for example, managed to organize seven “cultural lectures,” where we provide Japanese audiences with the opportunity to experience some of the many wonders and riches of the music and culture of Bahrain, Bolivia, China, Kazakhstan, Kirghiz, Korea and Uzbekistan. We also invited talented musicians and performing artists from Australia, Denmark, Finland, France, Korea, Lithuania, Norway, Sweden, the UK and US to hold concerts and shows, wooing and wowing concertgoers in Japan with literally hundreds of mesmerizing performances.

In addition to such cultural exchange activities, Min-On was the organizer of a number outreach initiatives, ranging from school concerts held free of charge for Japanese students nationwide to online stages by various musicians and debut concerts by the winners of the 19th Tokyo International Conducting Competition.

On December 1, 2022, our association opened to the public the newly renovated Min-On Music Library and Min-On Music Museum, the latter which includes original pianos and music boxes several centuries old collected from around the world.

Min-On will be commemorating its 60th anniversary in 2023, persisting in our founding mandate of directing the power of music and the performing arts to facilitate better understanding among people the world over and to advance peace. We pledge that our work next year—and the decades to follow—will prove no different.

We look to your continued interest and may you all enjoy a safe and happy holiday season.