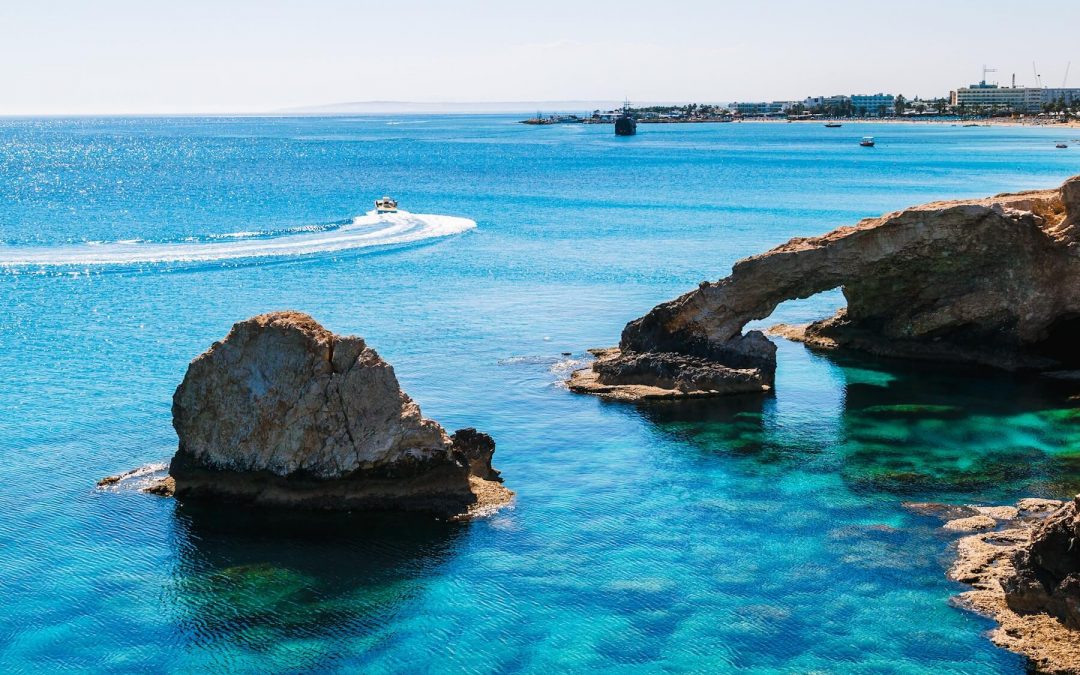 Welcome to Min-On’s Music Journey! Today, the Min-On Concert Association and the Embassy of the Republic of Cyprus in Japan welcome you to Cyprus in the Eastern Mediterranean Sea. 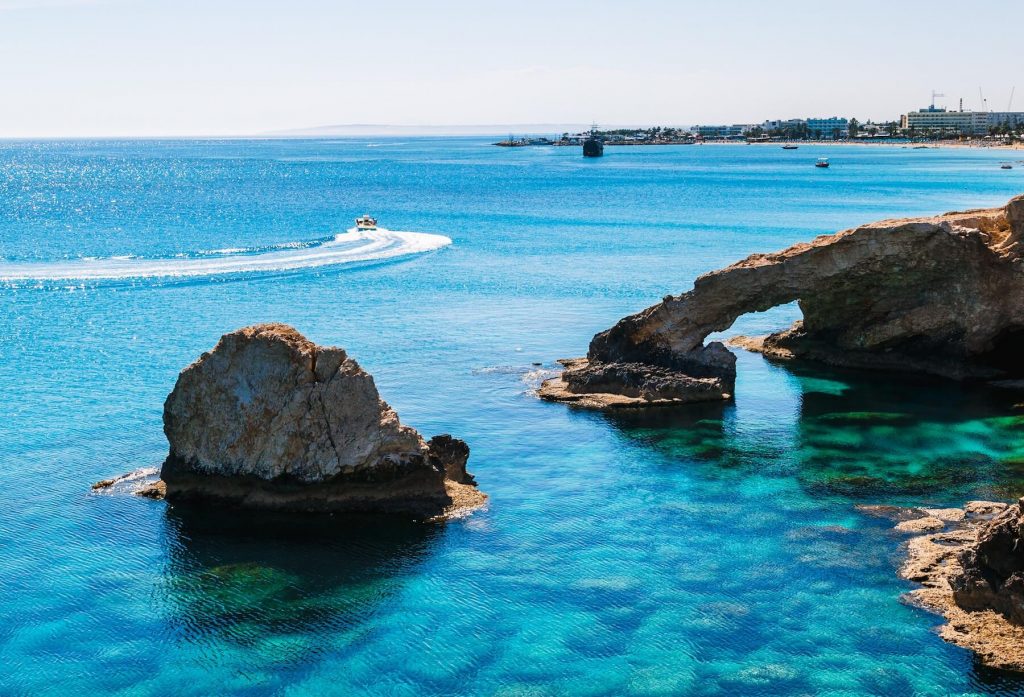 Cyprus is an island nation featuring wonderful travel destinations across an area of 9,251 square kilometers (slightly smaller than Jamaica). With lush mountains along its dazzling coast and beautiful architecture, the country is densely packed with breathtaking locations. Cyprus is also known as the mythical birthplace of Aphrodite, the goddess of love and beauty. 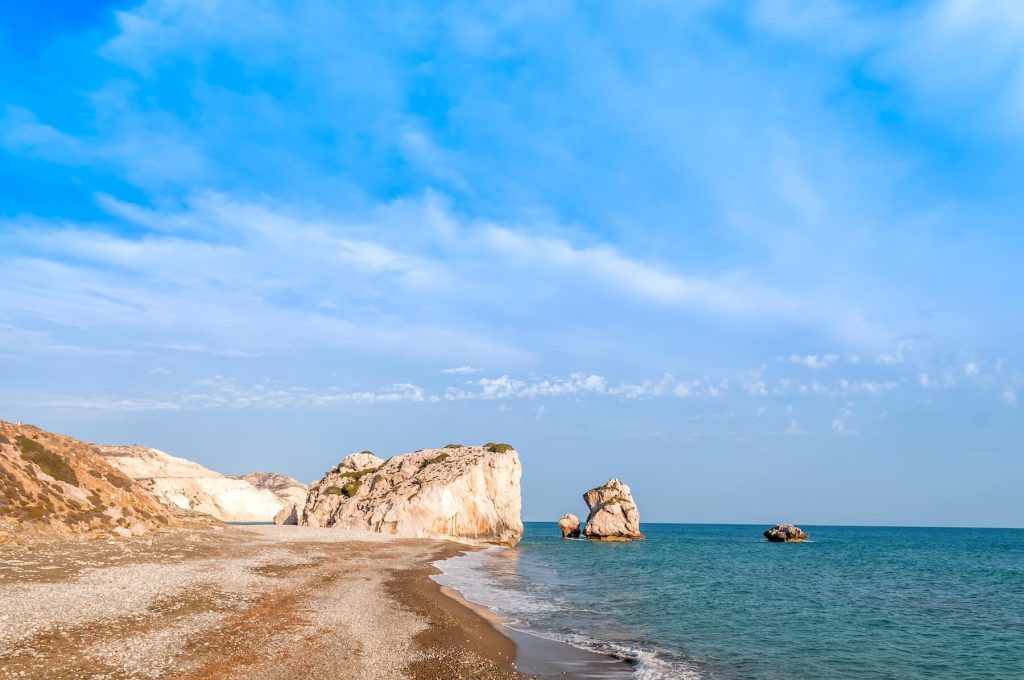 Cyprus declared its independence in 1960 and established diplomatic relations with Japan in 1962. This year (2022) marks the 60th anniversary of that occasion, which we are very pleased to commemorate.

The roads in Cyprus are well maintained and the country is relatively small, so it’s pleasant to travel almost anywhere by car. Taxis are also convenient, but since cars drive on the left side of the road and drivers sit on the right—just like in Japan—it’s easy to rent a car from the airport and travel the country freely.

The climate and history of Cyprus

In order to fully enjoy our journey across Cyprus, it’s important to briefly touch on its climate and history.

Cyprus has a Mediterranean climate, so it is warm and pleasant all year. The country is also known for a high percentage of sunny days. Visitors will need winter clothing from December to February, but because it still gets warm during the daytime, outdoor sports and sightseeing can be enjoyed year-round.

Because Cyprus occupies a critical location linking Europe, the Middle East and Africa, it has served as a crossroads of many civilizations since ancient times.

Cyprus has a long and rich history of surviving through times of strife. A great number of civilizations shaped the culture of this island, and Cyprus has been prevalent on world stage during the Neolithic Age (11,000 years ago), the Bronze Age, the Hellenistic Age (Ancient Greece) and the eras of the Roman Empire, Byzantine Empire, the Republic of Venice, Ottoman Empire and British Empire, just to name a few.

Let’s begin our journey across Cyprus, starting from the capital of Lefkosia.

The capital of Lefkosia, surrounded by walls from the Venetian Era

The capital of Lefkosia (Nicosia) is has a particularly long history, even for Cyprus. The old town is surrounded by a fort and defensive stone walls built in the Venetian Era. Visiting this area of the city make visitors feel like they’ve wandered back in time.

At the same time, there are also modern sections in the city filled with fashionable restaurants and shopping centers. Ledra Street is lined with popular European brand name shops, making it a popular place to stroll and peruse for both locals and visitors.

The neolithic ruins of Cyprus

The neolithic ruins of Chirokitia lie in the central region of Cyprus. These ruins from about 7000–4000 BC are in remarkable condition, leading UNESCO to register them collectively as a World Heritage Site in 1998 for their incredible historic value. 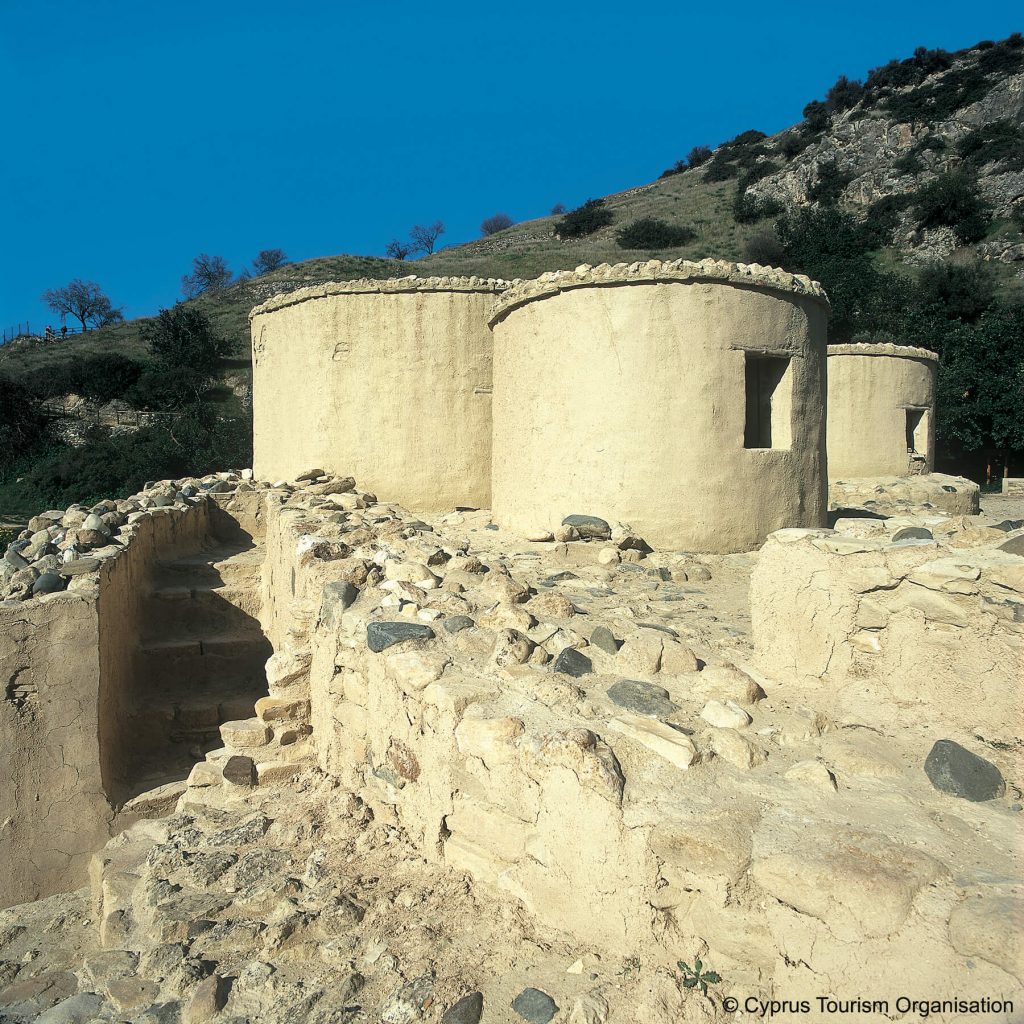 Thanks to the discovery of copper in Cyprus in about 3900 BC, the Neolithic Age ended and Cyprus entered the Bronze Age, which lasted for about 5,000 years. The discovery of copper drew the attention of Cyprus’s neighbors and is likely a primary factor that contributed to its tumultuous history.

The beautiful landscapes and port cities of Cyprus

Cyprus is home to many unique and noteworthy port cities. Let’s travel from Paphos in the west to Lemesos in the south, toward the central mountainous region of the country.

The port city of Paphos, mythical birthplace of Aphrodite

Paphos lies on the west coast of Cyprus and is the birthplace of Aphrodite, according to myth. This story, paired with one of the most beautiful coastlines in the world, make it a must-visit location. The entire city is a World Heritage Site filled with invaluable ancient ruins, including royal tombs from the 4th century BC, mosaics from the mansions of the elite built during the reign of the Roman Empire and a medieval castle from the Byzantine period. 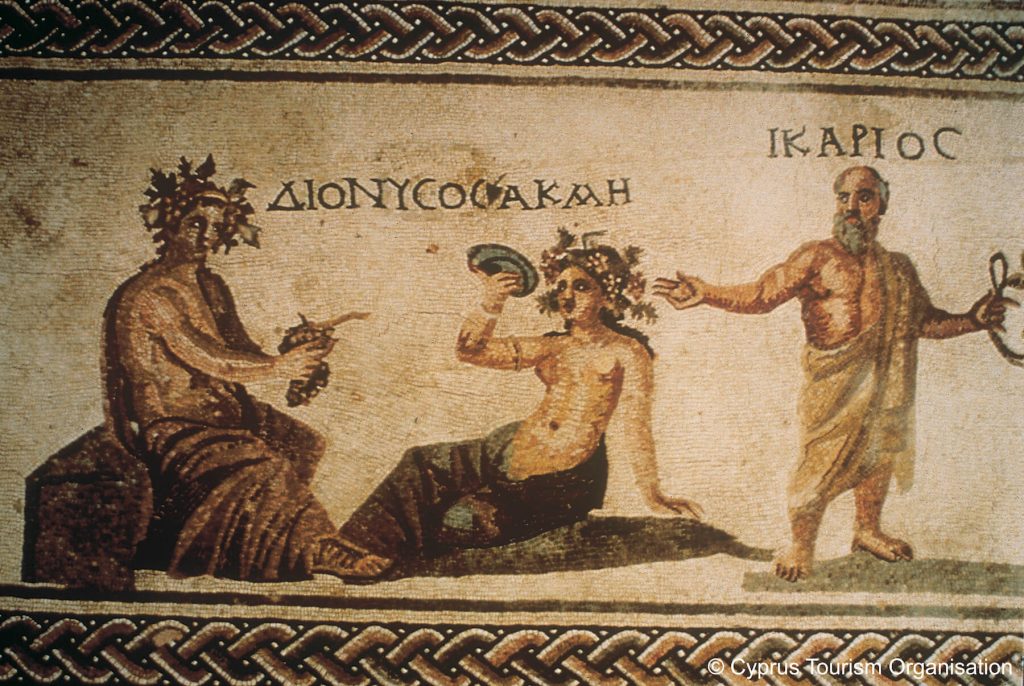 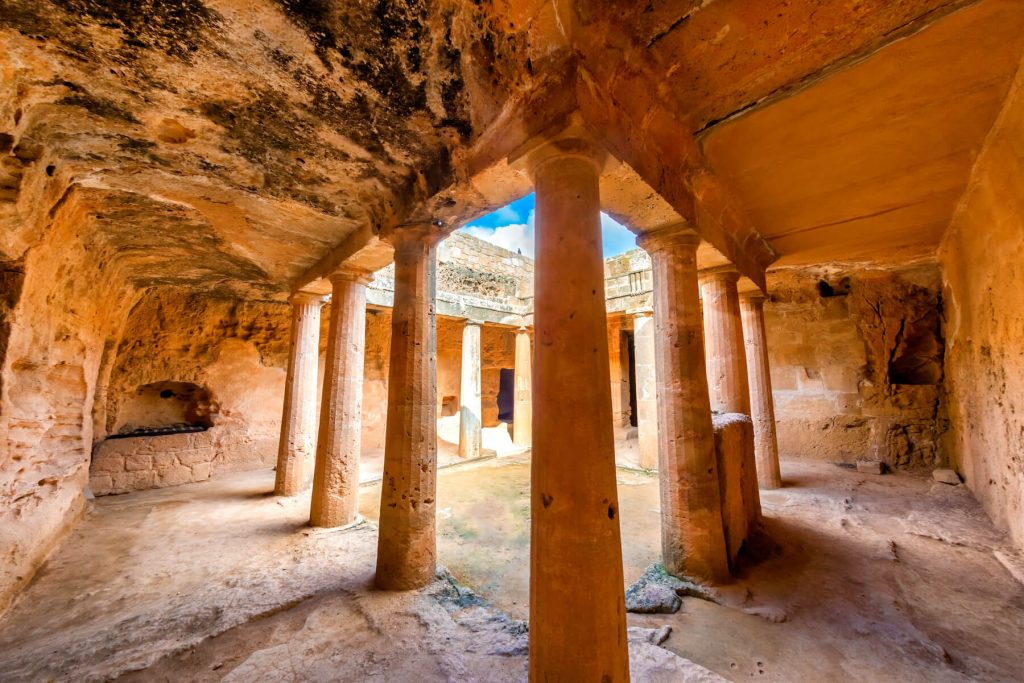 Lemesos is the largest commercial port in Cyprus, making it a center for commerce with international companies, but it is also the site of many festivals. From wine festivals and nightclub parties to daily events like “Let’s Celebrate the Beautiful Sunset” day, living for celebrations and festivals is common practice for the people of Lemesos. 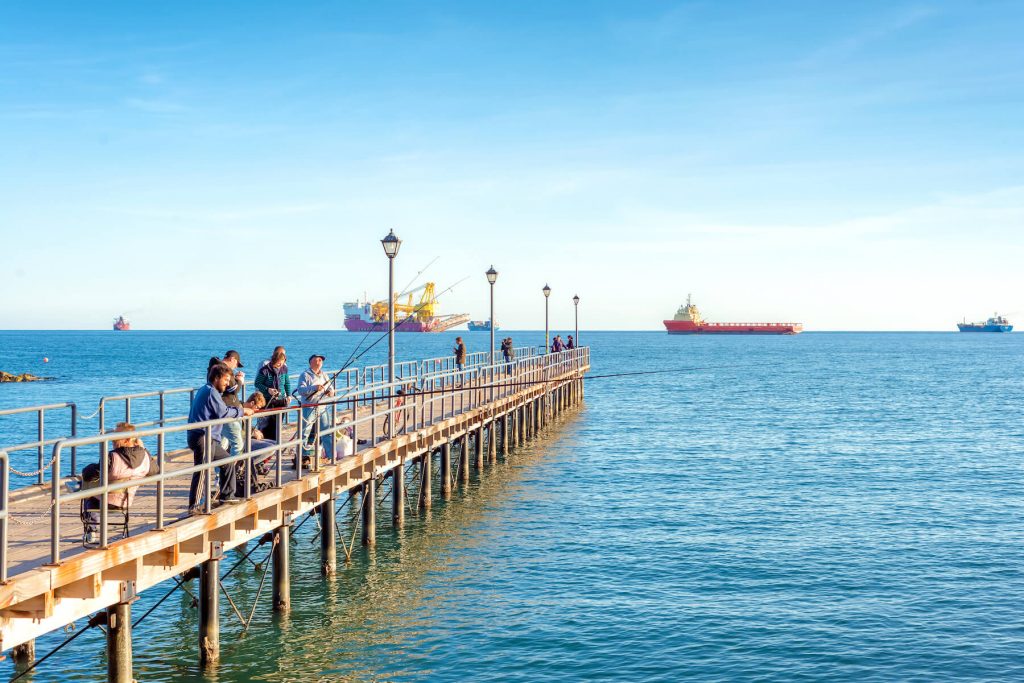 The Limassol Carnival Festival in particular draws 50,000 people and the entire city holds a feast that anyone can join and enjoy.

The Troodos Mountains and Lefkara Village of central Cyprus

Lefkara Village lies in the central-southern area of the Troodos Mountains. This small village still has a medieval atmosphere, but it is also a summer resort area selected as one of Europe’s 30 most beautiful villages. Lefkara is famous for its traditional handmade lace, called lefkaritika, which UNESCO registered as Intangible Cultural Heritage in 2009. 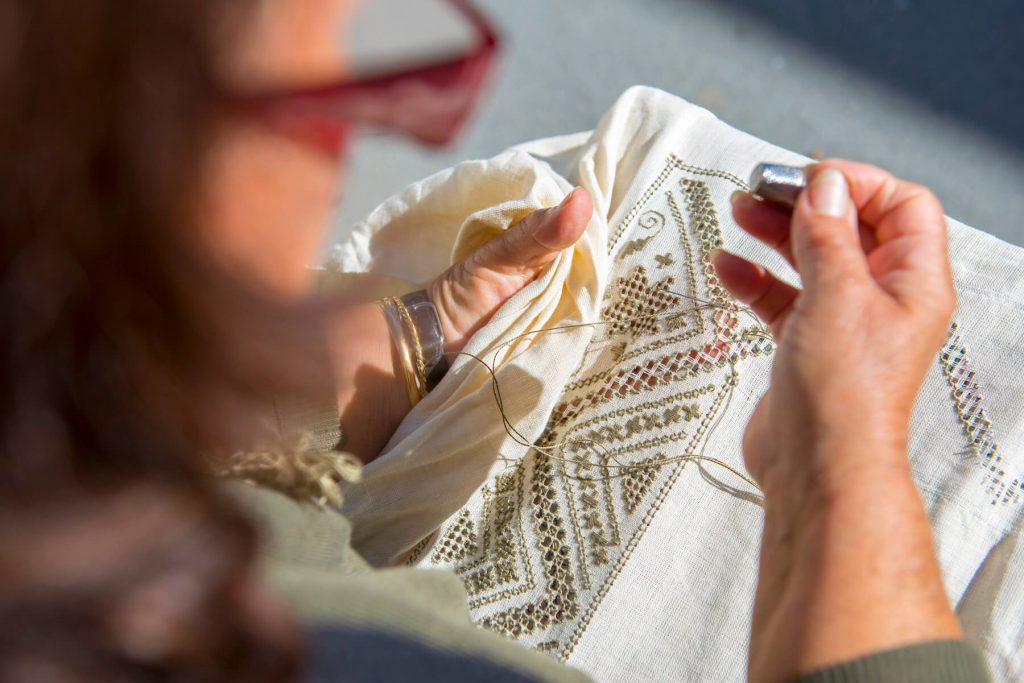 Today, Cyprus still features winemaking tradition passed down from Ancient Greece and Ancient Egypt. Archaeologists have discovered wine jars from over 6,000 years ago in Lemesos, making them some of the oldest in the world.

The oldest-known wine in the world, Commandaria, is still produced using the same process in Cyprus today. This sweet dessert wine, said to have been a favorite of Queen Cleopatra, makes for a perfect souvenir.

The best accompaniment to enjoy with this wine is the unique Cyprian cheese called halloumi. It has a firm, resilient texture, and is delicious both raw and grilled. In Cyprus, it’s not uncommon for locals to eat this popular food daily.

To conclude our journey, we would like to introduce musicians recommended by the Embassy of the Republic of Cyprus in Japan.

What did you think of your music journey to Cyprus? There are still many more places to go! Please look forward to our next destination. (Produced in collaboration with the Embassy of the Republic of Cyprus in Japan, which also provided photos.)