Min-On Music Journey No. 33: The Federated States of Micronesia 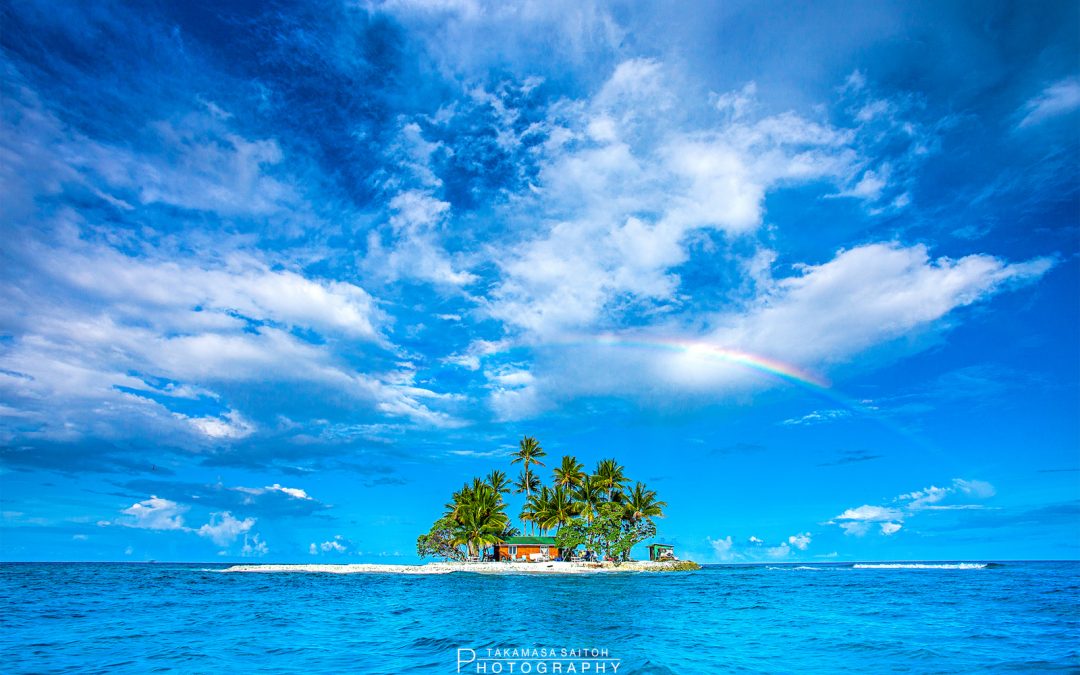 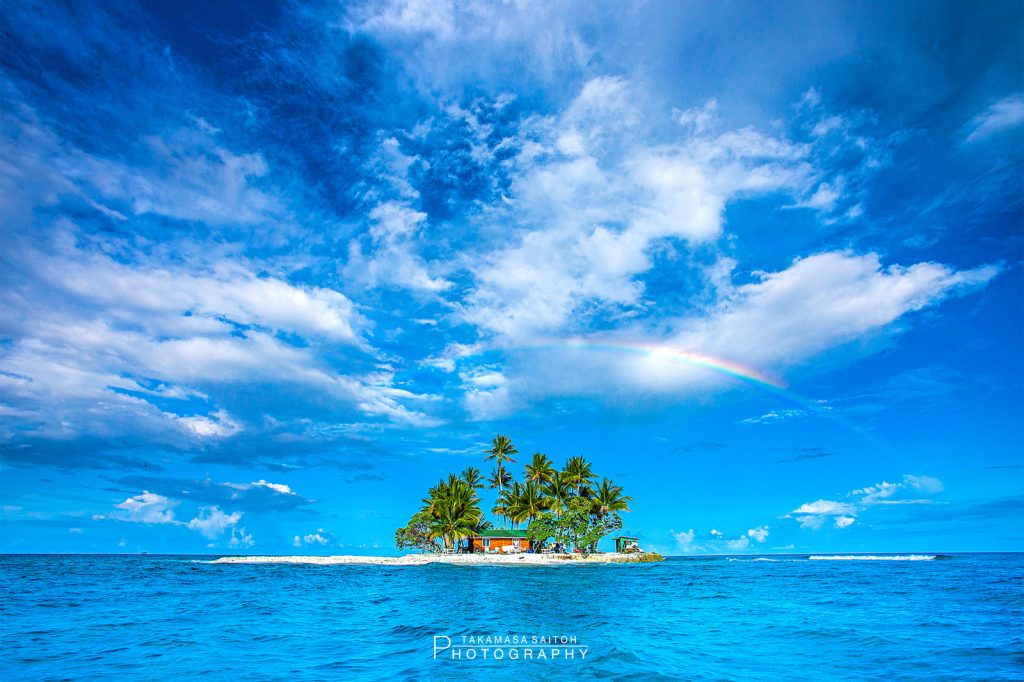 Welcome to Min-On’s Music Journey! Today, the Min-On Concert Association and the Embassy of the Federated States of Micronesia (FSM) in Japan welcome you to the FSM in the western Pacific Ocean.

First, please listen to a message that Ambassador John Fritz has prepared.

The FSM is approximately 900 kilometers from Guam and encompasses nearly all of the Caroline Islands, which span about 2,500 kilometers from east to west. The Federated States of Micronesia are a beautiful cluster of 607 small islands and atolls (ring-shaped coral reefs) grouped into four states: Yap, Chuuk, Pohnpei and Kosrae.

The light blue of the FSM’s flag symbolizes the Pacific Ocean and the four white stars represent its four states. 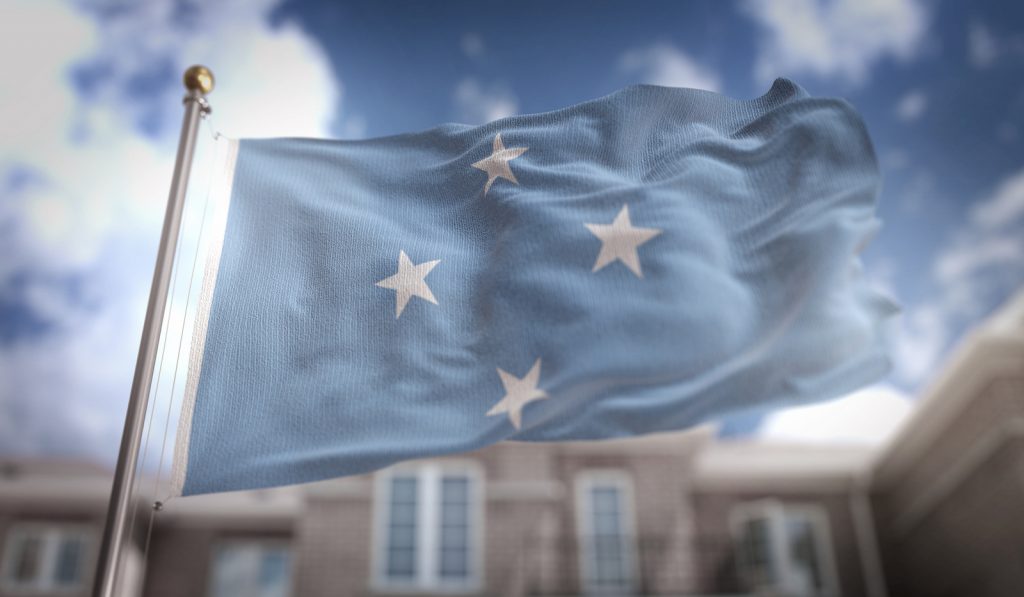 Kolonia, the largest city on Pohnpei Island, was once the capital of the FSM. In 1986, the government consolidated all government offices into a central administrative hub in Palikir and built legislative, executive, judicial and other important government facilities there. The government then officially moved the capital to Palikir in 1989.

The best-known aspect of Yapese traditional culture is rai stones. Although they can’t be used as standard money, Yap residents do use them to lease property and express congratulations or apologies. The value of each rai stone coin is decided not by its size or weight, but by factors including how it was made or how difficult it was to transport to the island. The stones are generally circular with a hole through the center. They vary in size, with some as large as two meters in diameter.

Another Yapese tradition includes passing down village history and cautionary tales through song and dance. The Yap Day festival is part of this tradition, held every March 1 as the largest festival in the FSM. During the two-day festival, locals from villages across the island perform folk dances and hold competitions including produce and seafood fairs, coconut husking, basket weaving and other skills important for life on the island. So many overseas visitors attend the festival that airlines and hotels are usually completely booked. In early summer, all Yapese living off-island return for a Homecoming Festival featuring different folk dance performances. This festival is held to ensure Yapese always remember their native culture.

Please enjoy this video of the 2018 Homecoming Festival, which coincides with the 30th anniversary celebration of the establishment of diplomatic relations between Japan and the FSM. The video features beautiful scenes of the island and many rai stones. 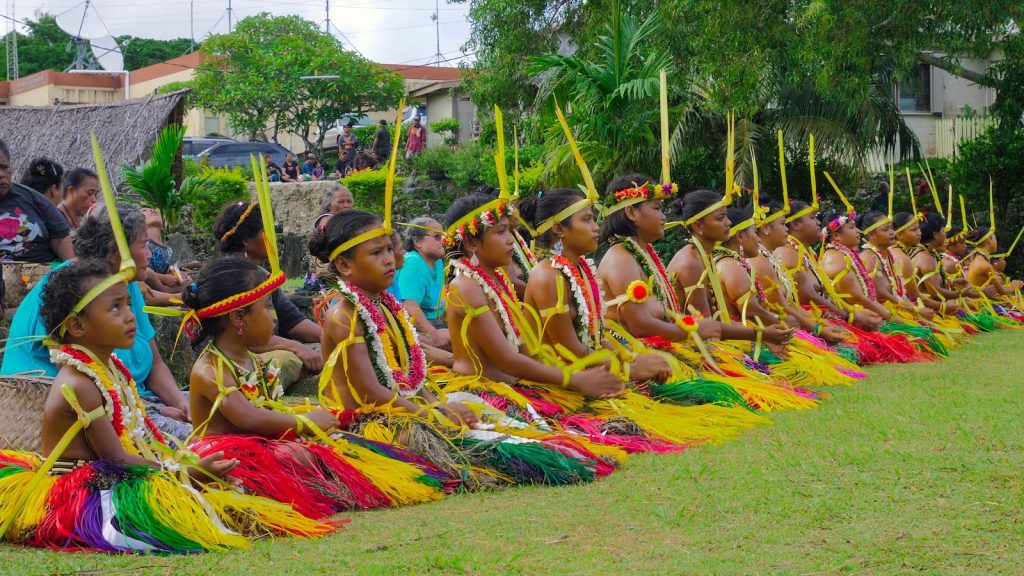 The paradise islands of Chuuk State

The state of Chuuk consists of about 100 islands of different sizes within one of the world’s largest atolls enclosed by a protective reef, the Chuuk Lagoon. Here, around 80 Japanese ships sunk during the Pacific War and still rest on the ocean floor, making Chuuk Lagoon a popular wreck diving spot that attracts divers from across the globe. Some scenes of the film Titanic were also filmed here, causing the island to surge in popularity.

Some islands in Chuuk Lagoon feature accommodations but are uninhabited. One of the most popular is tiny Jeep Island, which is completely surrounded by the sea and only 34 meters in diameter. Here visitors can enjoy diving, swimming with wild dolphins and gazing up at the night sky replete with stars.

Please enjoy the video below of Jeep Island, said to be the island of miracles.

Jeep Island’s dolphins, known for their friendliness (left) and Night sky on Jeep Island, better than any planetarium due to lack of light pollution (right)

Mr. Koben Mori, a businessman from Kochi Prefecture, was the first Japanese person to emigrate to the FSM. His many descendants live throughout FSM and form the well-known Mori family, which includes up to 3,000 members. His great-grandchild, Emanuel Mori, served as the nation’s seventh president!

Pohnpei and its mysterious ruins

In 1820, explorers discovered the ruins of a historic floating city spanning 95 man-made islands of different sizes near Pohnpei Island. UNESCO registered Nan Madol: Ceremonial Centre of Eastern Micronesia as a World Heritage Site in 2016. Nan Madol prospered as the capital of a former dynasty during 1000 to 1600 AD, and its name means “the space between humans and the gods” in the indigenous language. Archaeologists have found a stone palace, temple, cemetery and houses within the ruins, but how its people transported and stacked the massive, multi-ton basalt stones to build these structures is still a mystery. Most of the ruins are covered by mangrove trees, preserving the mysterious atmosphere.

Please enjoy this video introduction to the Nan Madol ruins. Kepirohi Waterfall near the Nan Madol ruins is also a spectacular sight. A voluminous river surges down over the 20-meter-tall, 30-meter-wide basalt rock face, drawing many tourists to this powerful and refreshing site. 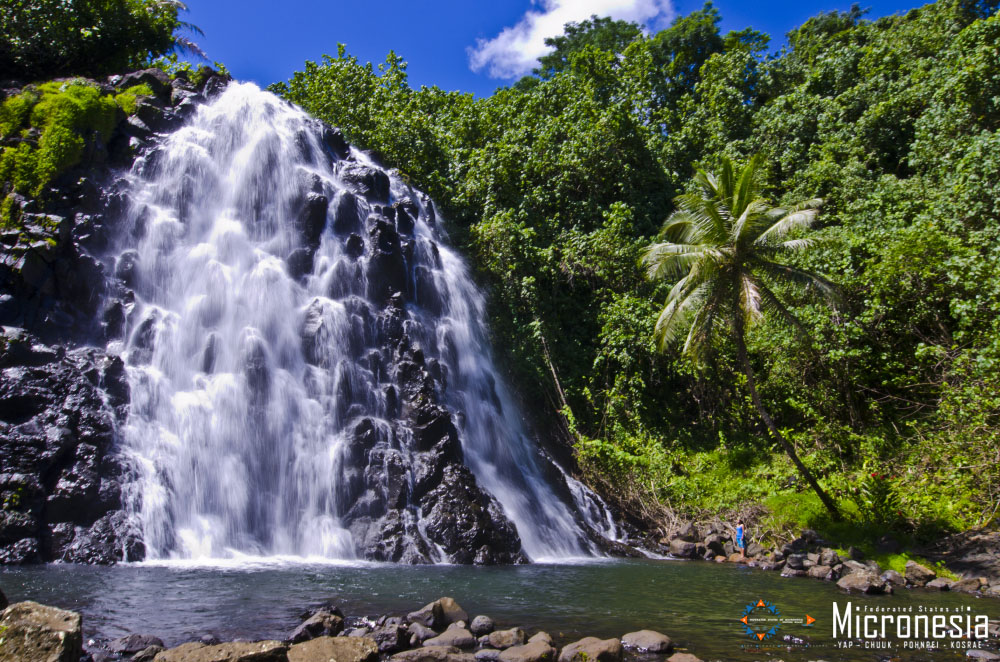 One of the many waterfalls and rivers in Pohnpei, which has world-leading rainfall levels.

An essential part of Pohnpei cuisine is sakau, a drink extracted by pounding the roots of pepper plants. On important occasions, local people may perform a ceremony where they pound the roots to a special rhythm to make sakau as the chief and special guests watch. During this ceremony, the drink is passed around following strict etiquette, starting with the chief and descending in rank. Recently, sakau has become an everyday drink. 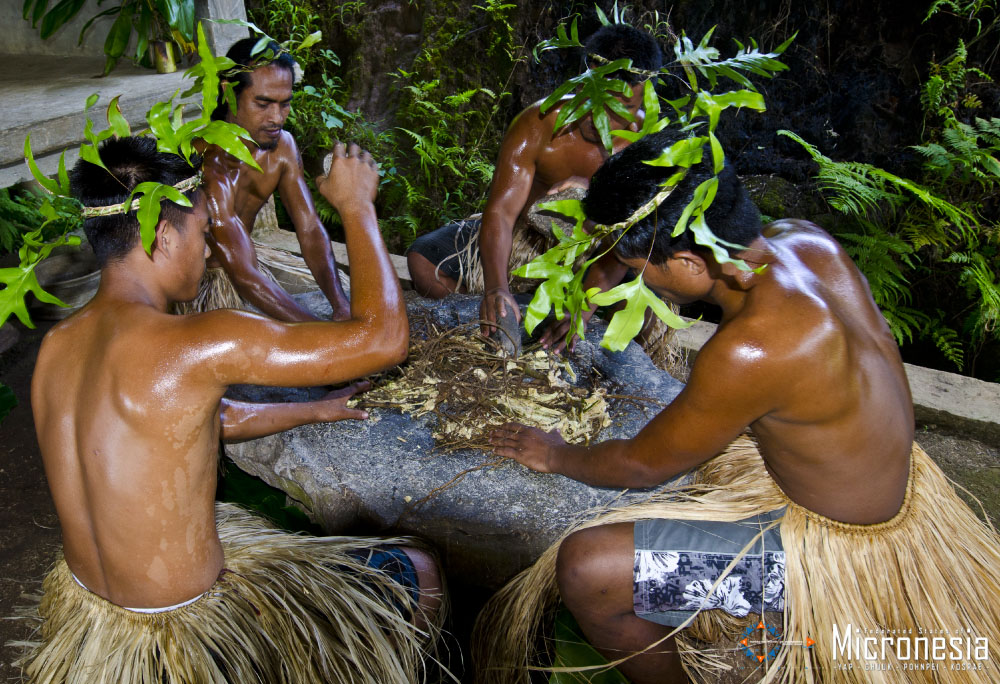 Locals making sakau, which has a calming and relaxing effect

Kosrae, the jewel of the Pacific

Unlike other states in the FSM, Kosrae State consists only of Kosrae Island. This island has the most pristine mangrove forests and coral reefs in the world, earning it the name “Jewel of the Pacific.” The expansive island is protected as a marine preserve and is home to rare native trees and birds.

A majority of the population in Kosrae are devout Christians. Every week on Sunday, the Sabbath, families refrain from work of any kind and instead go to church to pray. The locals make Kosraean soup (or Sunday soup) with rice and fish like tuna or bonito boiled in coconut paste on Saturday, then gather around the table on Sunday to share a meal.

Please watch the video to learn how to cook Kosraean Soup. 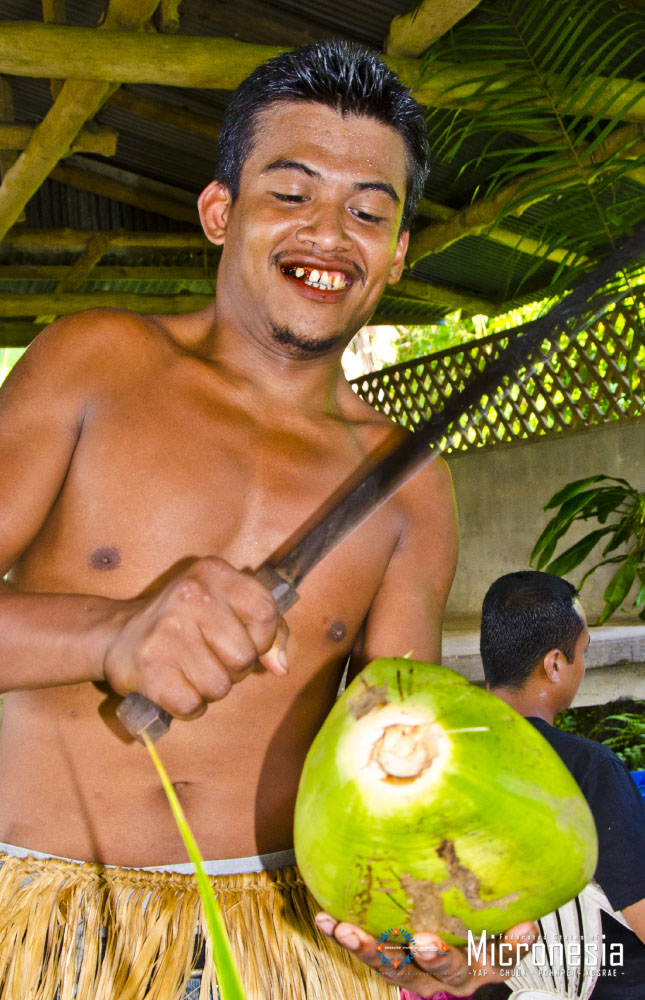 Coconuts, essential for life thanks to their wide range of uses

Musicians of the FSM

In closing, we would like to introduce musicians recommended by the Embassy of the Federated States of Micronesia in Japan.

This band’s name, ReChuuk, means “Chuukese person” in the local language. The band was led by Jesse “Che” Mori, who was one of the FSM’s greatest musicians, and a descendant of Koben Mori. He passed away in 2006 at the young age of 30. Even after his passing, he is still praised as a legend, and people of all ages continue to love his songs.

This is ReChuuk’s most iconic song.

This song depicts the artist’s love for a woman through metaphor of a voyage. Seserez means “to leave it to the wind” in the indigenous language. 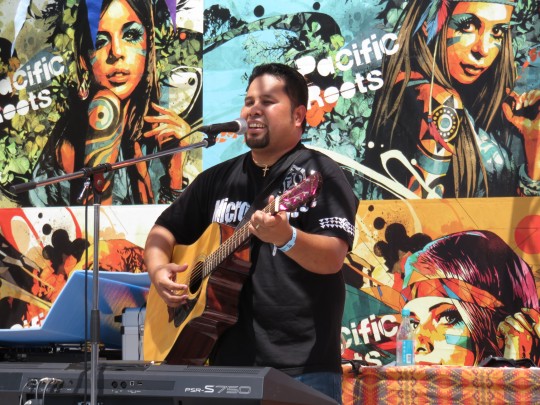 Sekenan is a Chuuk descendant of Koben Mori from Kochi Prefecture, Japan, who is said to be the inspiration for the comic Adventures of Dankichi. In August 2016, Sekenan performed at the Pacific Roots FEST 2016, a cultural exchange festival held in Yokohama highlighting Pacific Island art and music.

Everyone in Chuuk knows this song. The composer and lyricist are unknown, but everyone credits ReChuuk’s performance for making it so popular.

Finally, please enjoy this video of FSM high school students performing remotely due to COVID-19 with Japanese a cappella group INSPi to sing Ue o Muite Arukou (“I Look Up as I Walk,” or also known as “Sukiyaki”).

What did you think of your music journey to the Federated States of Micronesia? There are still many more places to go! Please look forward to our next destination.