Welcome again to Min-On’s Music Journey! In this installment, let us guide you to the Portuguese Republic, located in Western Europe’s Iberian Peninsula. Portugal was known throughout history as a naval pioneer that commanded the seven seas during the Age of Discovery.

During the 15th century, adventurers from Portugal set out across the sea and discovered new routes and new lands, such as the Cape of Good Hope in South Africa. This brought about many major turning points in world history.

Because the capital city of Lisbon is surrounded by the hills of the Tagus Estuary, it is also called the « City of Seven Hills. » In addition to this beautiful scenery, historic structures including the Jerónimos Monastery, constructed in honor of the achievements of Vasco da Gama, São Jorge Castle and Belém Tower still watch over the Portuguese people today.

The city of Lisbon (left) and Rossio Square, a popular meeting place

Porto is a port city in northern Portugal that was well known even in ancient times. Among the many historic buildings in the city, Porto Cathedral is the oldest, and its construction began in 1110 AD. Other highlights include buildings decorated with beautiful blue azulejo tiles and the Dom Luís I Bridge over the Douro River, which flows from northern Spain into the Atlantic Ocean. Wine production from the grapes growing upstream of the Douro River began in the mid-14th century. When Porto began exporting this wine in the 18th century, it came to be known as « port. »

A church in Carmo (the Carmo Convent), beautifully decorated with azulejo

Port wine (left) and the two-story Dom Luís I Bridge, completed in 1886 (right)

The charming city streets of Portugal

There are many other cities where one can feel history alive and breathing, including the water-filled city of Aveiro, called « the Portuguese Venice, » Coimbra, the cultural center of Portugal, and Sintra, registered as a World Heritage Site. Cape Roca is located at the westernmost point of the Eurasian continent. The sheer cliffs, where you can gaze out at the sea challenged by adventurers of days past, never cease to fascinate visitors.

The charming streets of Sintra

The fascinating food of Portugal, a country of culinary delights

The cuisine of Portugal owes its allure to abundant use of fresh seafood from the Atlantic Ocean. Seafood dishes made in a rounded pan called a cataplana are highly popular. Portugal is the word’s largest consumer of cod, and visitors should not miss trying bacalhau—salted and dried cod that is rehydrated during cooking. In addition, Portugal has a thriving agriculture and livestock farming industry that takes advantage of the Mediterranean climate. Another characteristic of Portuguese cuisine is the use of domestically-produced ingredients and spices from all over the world, including olives, piri-piris (small, spicy chili peppers), vanilla and coriander. Popular desserts include egg tarts using plenty of egg yolk and flavored with cinnamon or vanilla, as well as pão de ló, a precursor of the modern castella.

Fado, the soul of Portugal

Fado music was registered as Intangible Cultural Heritage by UNESCO in 2011. Representing destiny and fate, it’s said to be the music of the Portuguese soul. Amália Rodrigues, known as the Queen of Fado, showcases the tradition’s charm, and she is loved as a cultural treasure throughout Portugal. Fado is usually accompanied by classical and Portuguese guitars. However, during the Carla Pires concert held by Min-on in 2017, piano, cello and double bass were added, delighting the audience with a more modern melody.

After the death of nationally renowned singer Amália Rodrigues in 1999, Carla Pires was selected to play the role of young Amália in an eponymous musical depicting her life. Mrs. Pires is breathing new life into Fado while preserving its traditional style. She has gained notoriety as the leader of the Fado revival movement, not only in her home country but also in Europe, Central America and South America. Please enjoy two of her performances below.

The two styles of Fado, Lisbon and Coimbra

Fado, which was born in the downtown area of the capital Lisbon in the 1820s, has two styles: Lisbon Fado, which is sung by women and mainly delves into female emotions, and Coimbra Fado, which is mainly sung by men and concerns the lives of men. Lisbon Fado is characterized by its many melancholy and nostalgic songs, while Coimbra Fado is characterized by its many bright melodies and wide variety of styles.
Please enjoy a performance of both types of Fado from the 1991 Festa Portugal Concert. The videos below feature Lisbon Fado singer Ana Maria and Coimbra Fado singer António Bernardino, as well as the bamboo flute player Rão Kyao.

In closing, we would like to introduce music recommended by Ambassador Francisco Xavier Esteves of the Embassy of Portugal in Japan. 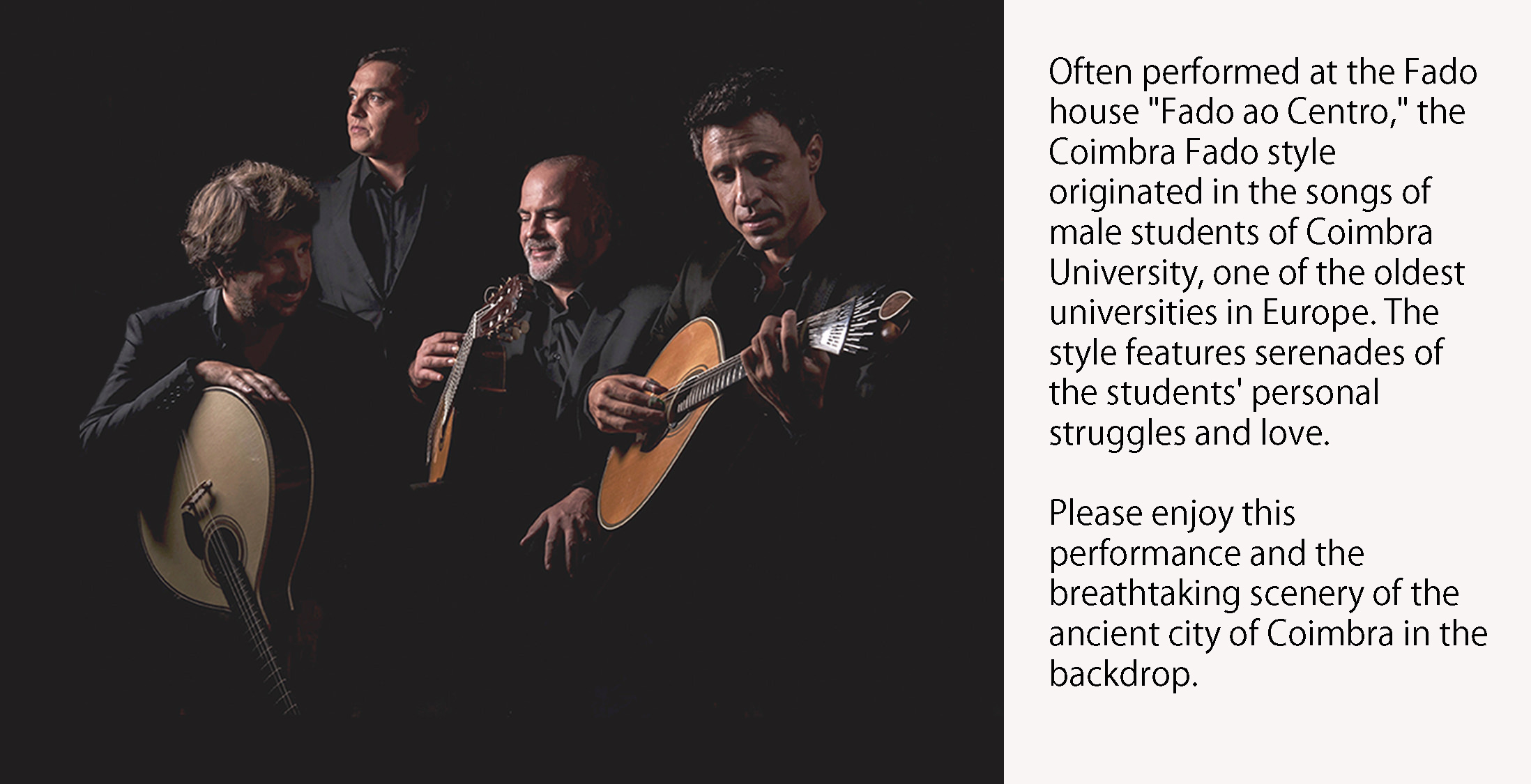 3. Commemorative video from the 100th Birthday of Amália Rodrigues (provided by the Fado Museum) 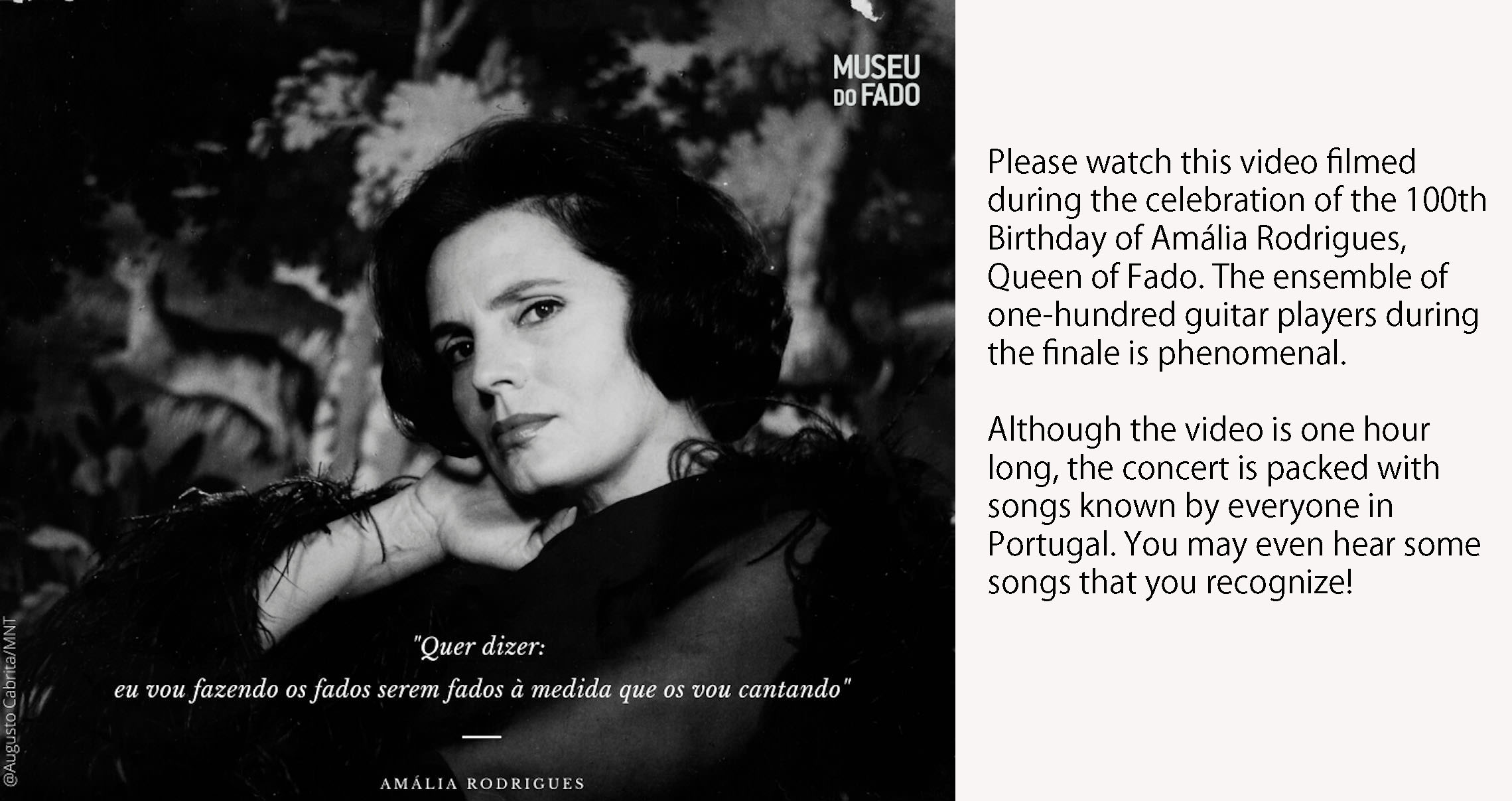 (In Portuguese, no subtitles)

What did you think of this music journey to the Portuguese Republic?
There are still many more places to go on our music journey. Please look forward to our next destination.

(Produced in collaboration with the Embassy of Portugal in Japan. Photos courtesy of the Portuguese Tourism Board.)