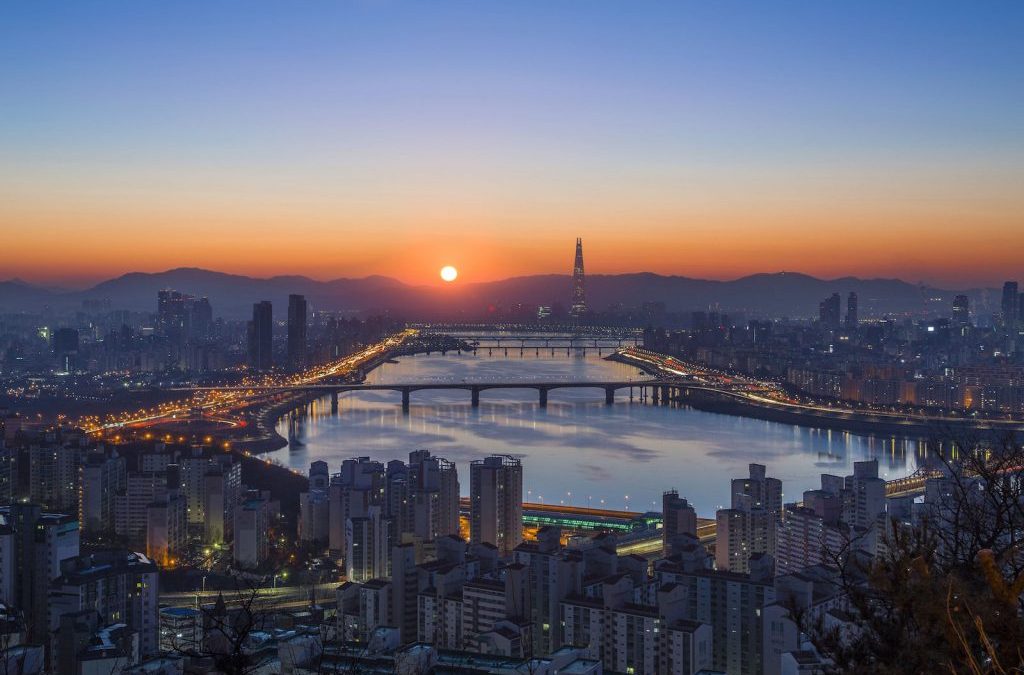 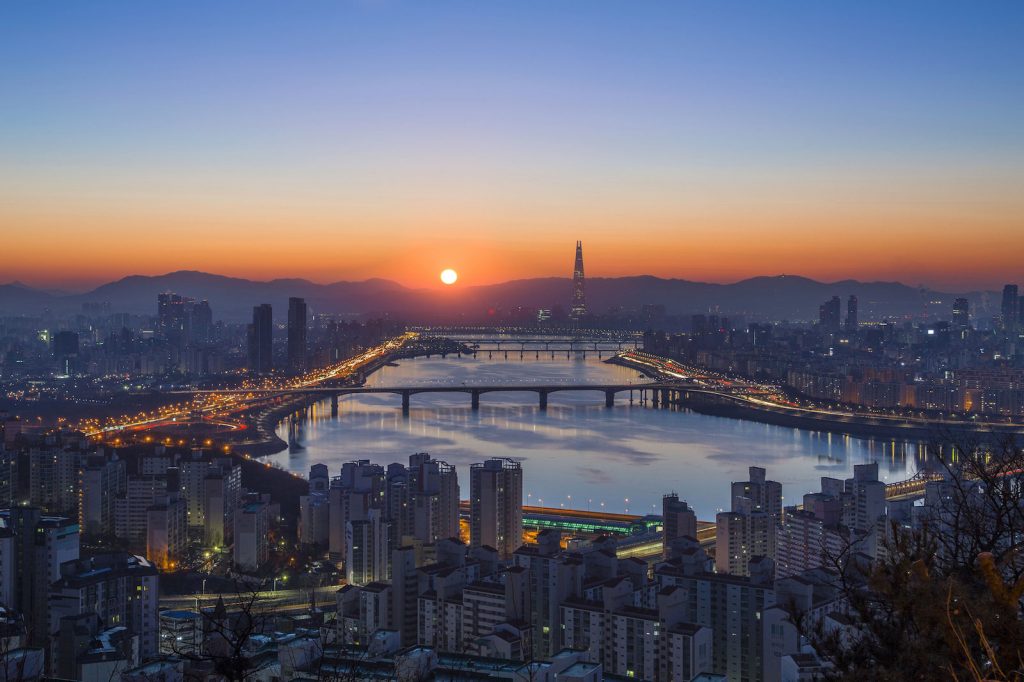 Feel the Rhythm of Korea

These promotional videos were produced by the Korea Tourism Organization. They showcase six iconic Korean locales alongside the lively rhythms and dancing of Korean alternative pop band LEENALCHI and the Ambiguous Dance Company, known for their unique performances. The series has gone viral, and its most popular video currently has over 46 million views.

Seoul, a crossroads of old and new

Seoul means « capital » in Korean. As the political, economic and cultural center of the country, it’s home to about 25% of the population. Seoul still retains vestiges of the Joseon Dynasty, although it also features modern landmarks, shopping districts and culinary destinations that attract large numbers of tourists every year.

Musicals are a particularly prominent example of modern Korean entertainment. The Daehakro area contains over 120 theaters for musicals and stage plays that host hundreds of performances every year. Young playwrights continue to introduce new art and culture through theater. Welcome Daehakro is a South Korean performing arts festival held each fall featuring non-verbal, traditional, musical and stage performances for visitors to enjoy.

The blue-roofed Cheong Wa Dae (Blue House) serves as the President of Korea’s official residence and the center of domestic politics. Each of the 150,000 roof tiles was individually fired in a traditional Korean architectural method, and the roof was built to last over 100 years. The grounds of Cheong Wa Dae contain many great examples of Korean architecture, including the Main Office Hall, State Reception House, Spring and Autumn Hall, Blue House Garden, Mugunghwa Hill and the Seven Palaces.

Deoksugung Palace is a historic structure next Seoul City Hall in the center of the city. It is one of the Five Grand Palaces built by royalty during the Joseon Dynasty. Interestingly, Jeonggwanheon Hall, Seokjojeon Hall and Jungmyeongjeon Hall on the palace grounds feature Western architecture. The historic changing of the royal guard ceremony is re-enacted at the main gate, Daehanmun.

Please enjoy all of Seoul’s charm in « Feel the Rhythm of Korea: Seoul” below:

Busan, a city of the arts and the sea

Busan is Korea’s second largest city, flourishing along the country’s southern coast. It has recently gained fame as a film location for TV dramas and movies, and the streets are lined with cafes and other shops popular with the younger crowd. Busan is blessed with an amazing ocean view and is home to many resorts.

Gamcheon Culture Village is also known as the Santorini of South Korea for its colorful row houses densely packed on a steep hillside. Public art and sculptures along the streets make the village feel like one giant museum for visitors to enjoy.

Busan’s famous Gwangalli Beach is lined with popular restaurants, cafes and fashion boutiques. Crowds of young people gather here at night to enjoy the beautiful lights of the nearby Gwangan Bridge. 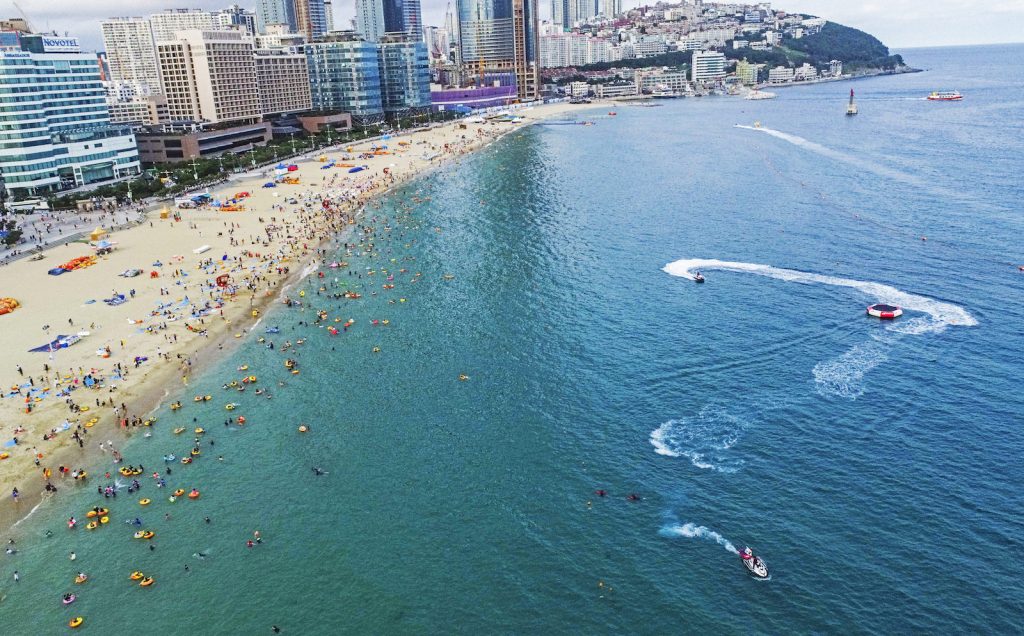 Please watch « Feel the Rhythm of Korea: Busan » below, which has over 42 million views on YouTube:

Jeonju is the capital of North Jeolla Province in southwestern Korea. It boasts a 1,200-year history and is the birthplace of the Joseon Dynasty. As the administrative, educational and cultural heart of North Jeolla, Jeonju wields most of the authority in the province. Visiting Jeonju Hanok Village, which contains over 800 traditional Korean houses called hanok, feels like setting foot in the Joseon Dynasty. Awon Museum & Hotel was built 250 years ago in Jinju City of South Gyeongsang Province, and was later moved to Jeonju. Far from simply a traditional hanok, it also houses the beautiful, modern Museum Gallery Café and has traditional hotel rooms. Photos taken here are extremely popular on social media. 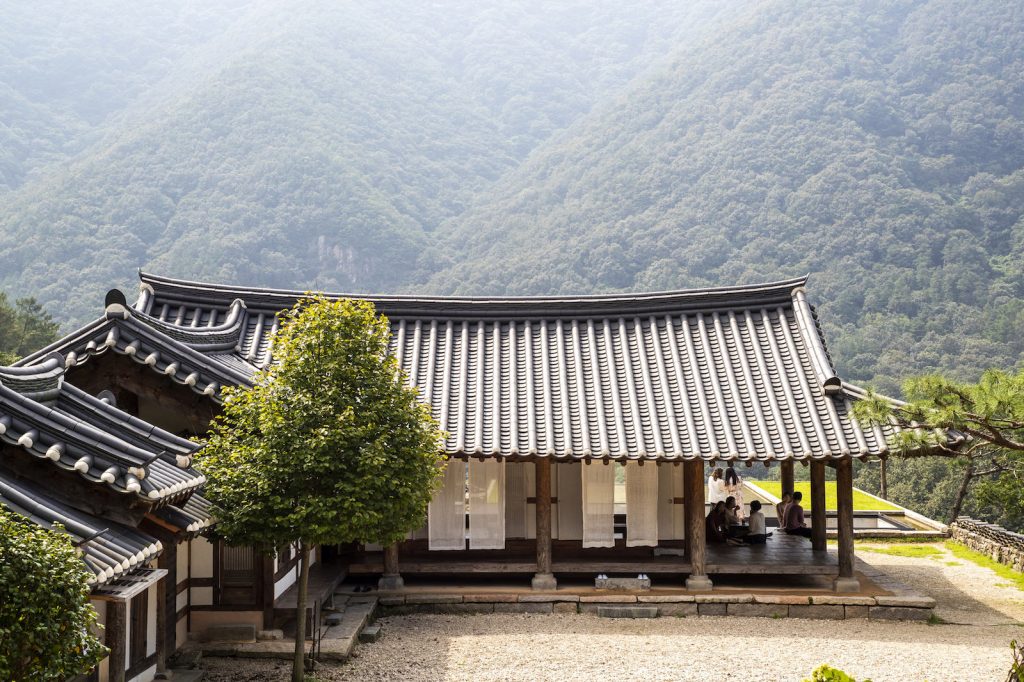 Please watch « Feel the Rhythm of Korea: Jeonju » below: 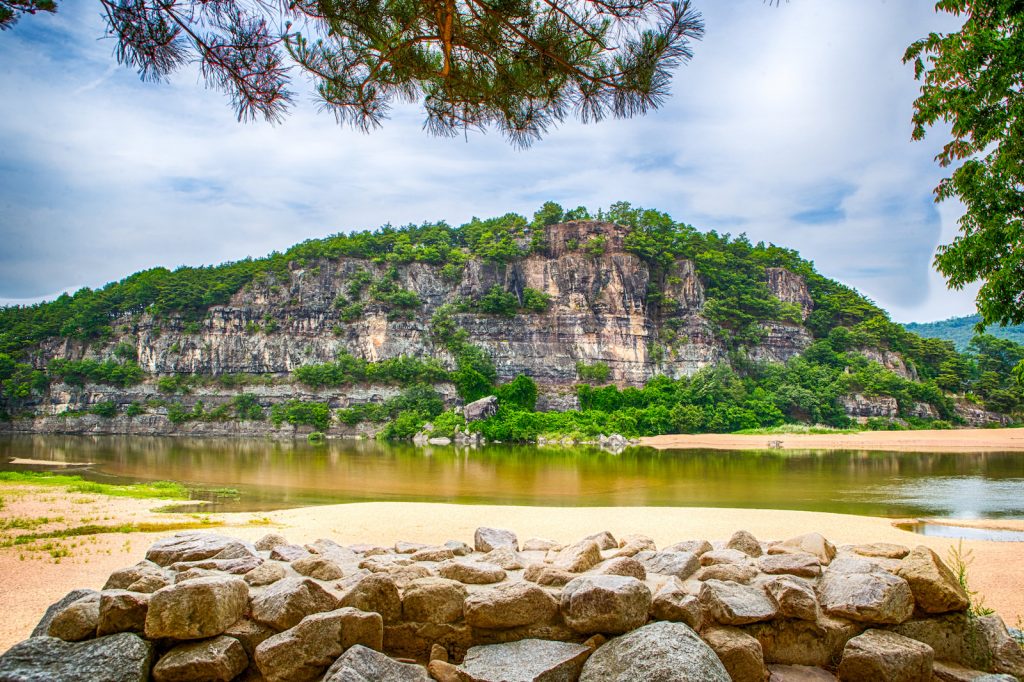 Andong, home of decorum and culture

Andong maintains the largest number of Korea’s important cultural assets and is known as « the home of decorum and culture. » The city’s beautiful mountainous agricultural areas, delicious local cuisine and 249 different cultural sites are a testament to its charm and tradition.

The village of Hahoe (lit. « returning river » in Korean) gets its name from the way the Nakdong River flows around the village in an S shape surrounding it. UNESCO registered the village as part of the Historical Villages of Korea World Cultural Heritage Site in 2010 due to its well-preserved buildings and historic layout. The city holds the Andong Mask Dance Festival every fall, giving audiences a taste of masked performances from across South Korea.

The Woryeonggyo Bridge is a 387-meter-long, 3.6-meter-wide wooden pedestrian bridge near the Andong Dam on the Nakdong River. The bridge opened in 2003 and welcomes many visitors annually. Visitors can enjoy spectacular views year-round from the Woryeongjeong Pavilion at the center of the bridge. It’s also famous for nighttime illumination and fountain shows. 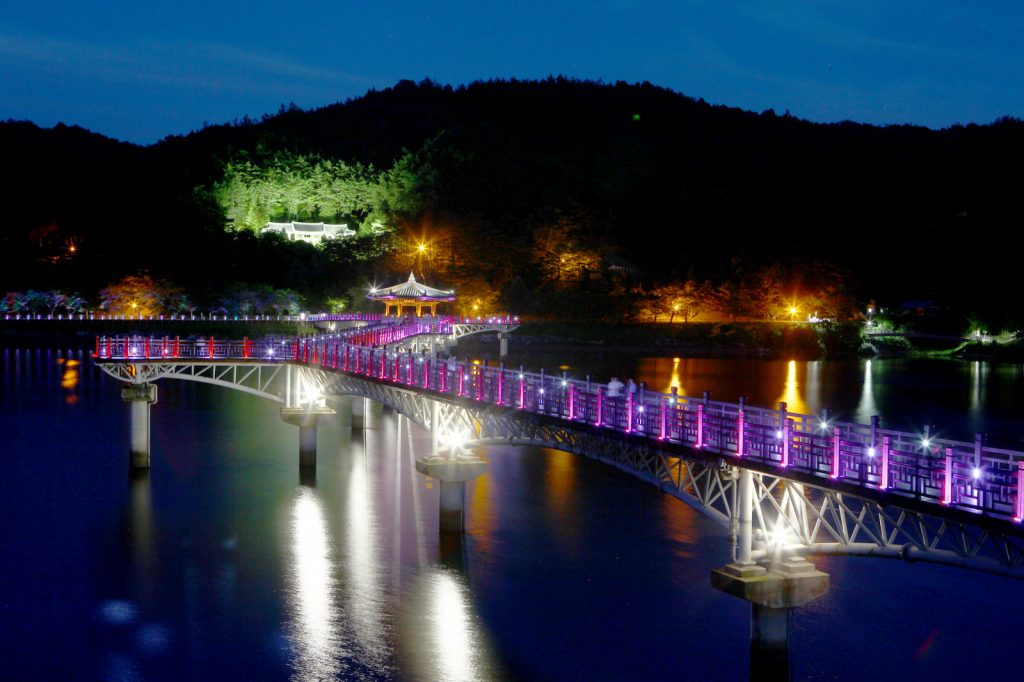 Please watch « Feel the Rhythm of Korea: Andong » below:

Mokpo, a famous port in the southwest

Mokpo is a flourishing port in southwestern Korea and a popular tourist destination thanks to the incredible natural beauty of its mountains and seas. The 3.23-kilometer-long, 155-meter-high Mokpo Marine Cable Car is the longest cable car in the country and a popular attractions From inside its cars, visitors can enjoy a panoramic view including the 228-meter-high Mt. Yudalsan, and the Korean archipelago and ocean below. The cable car’s “crystal cabins” have see-through floors, making them especially popular. The Korea Tourism Organization selected the Mokpo Marine Cable Car as one of the « 100 Must-Visit Tourist Spots in Korea (2021–2022). »

Please watch « Feel the Rhythm of Korea: Makpo » below:

The eastern coastal city of Gangneung is home to Naksan Temple, a Buddhist temple built on a small hill along Naksan Beach in the year 671 during the Silla Dynasty. A massive fire in the nearby forest destroyed most of the temple in 2005, but it was mostly reconstructed in 2009 based on site plans from the Joseon Dynasty and other archaeological evidence. The temple offers a beautiful ocean view and is a popular place to watch the first sunrise of the year. 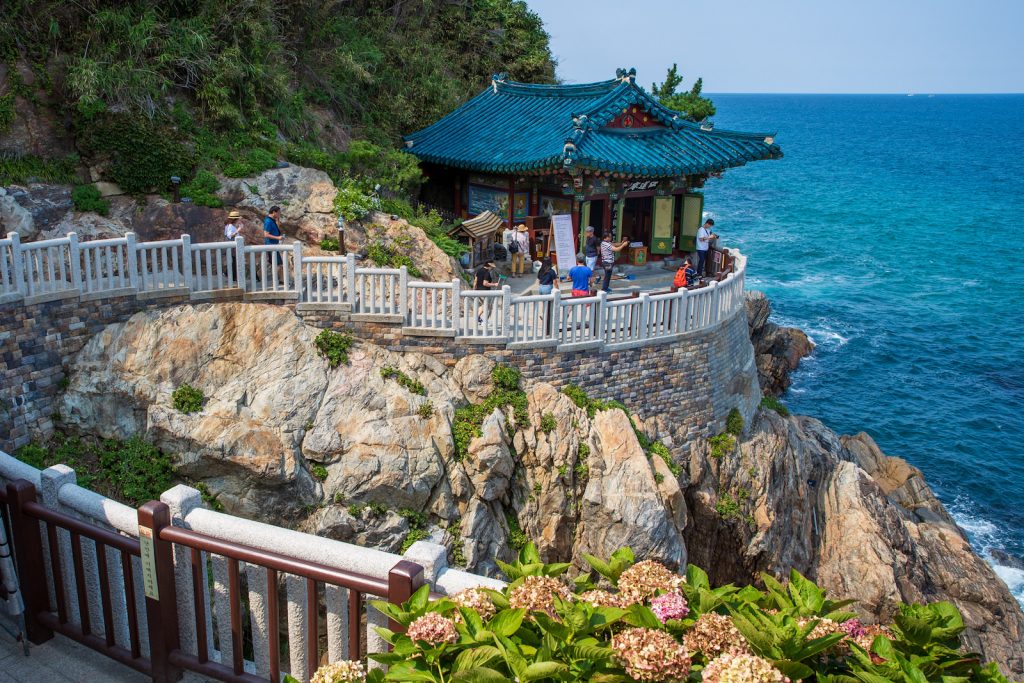 Jeongdongjin Station on the coast of Gangneung is recorded in the Guinness Book of Records as « the closest train station to the ocean. » In the past, it received so few passengers that it nearly closed down, but visitors suddenly spiked after the highly rated (64.5% viewership) Korean TV drama, The Hourglass, filmed here in 1995. Today it’s a popular weekend location for tourists.

Please watch « Feel the Rhythm of Korea: Gangneung » below:

Korean traditional dress is called hanbok, and its shape has changed over the centuries. Koreans wore hanbok as everyday clothing until about 100 years ago, while today it is worn as formal clothing for festivals and holidays. The garment seems to feature straight lines at a glance, but it flows beautifully when worn. The upper jacket is thin and the lower garment is wide, making it very practical and easy to move in. 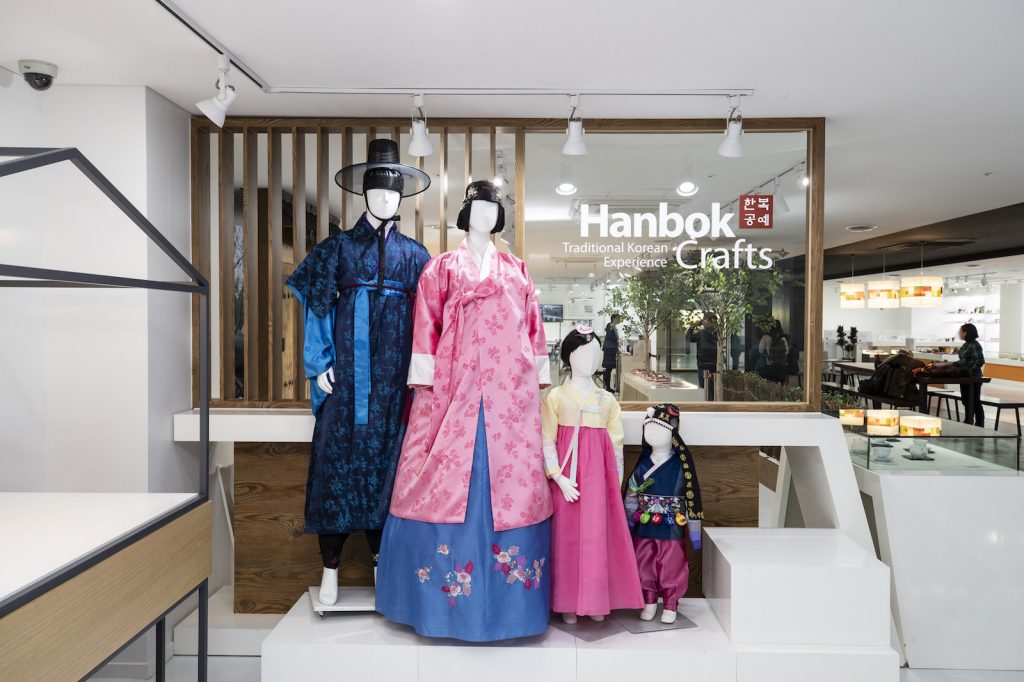 Traditional Korean music was an outlet for people’s emotions, and musical preference differed between royalty and the public throughout history. Traditional court music is called jongmyo jerye-ak, and it’s known for elegant, luxurious ambiance. In contrast, the public loved folk music that helped them endure arduous physical labor and songs about local folklore, notably the lilting pansori.

K-pop, which has become massively popular worldwide, started catching on outside Korea in the mid-2000s. Critics agree the reason for K-pop’s success is the combination of excellent vocals and well-choreographed dance in high-level stage performances.

Min-On has both hosted many musicians from South Korea, including the National Theater of Korea for a performance of « Chunhyang » (1987) and the Gyeonggi Provincial Dance Troupe (2011), and has also sent Japanese musicians to perform in South Korea to strengthen Japan and Korea’s benevolent relationship.

« Chunhyang » by the National Theater of Korea (1987, left) and the Gyeonggi Provincial Dance Troupe (2011, right)

First, please enjoy these two performances from the 2012 concert of The Seoul Performing Arts Company. This highly acclaimed group was founded in 1986 to preserve and further develop traditional Korean arts. They have performed over 800 times in more than 50 countries.

In this folk dance, dancers in beautiful dress use fans to create the shape of flowers, and the dance represents a butterfly contentedly lilting through a field of lovely blossoms.

Nongak began in the farming villages of Korea long ago as a way for laborers to endure grueling labor and celebrate the fall harvest. This important folk custom has been passed to the present largely unchanged.

Next, please enjoy performances from the 2007 « The Battle » concert featuring hip-hop dancers from both Japan and Korea. In June 2020, the Korean Cultural Center live streamed “Online Korean Culture Concert: Singing, Dancing and Fun” on their YouTube channel to give viewers a chance to enjoy traditional Korean performing arts from home. In the video, the center showcased South Korean traditional music and dances in hopes that the coronavirus pandemic will be resolved as soon as possible.

The Korean Cultural Center recommends this video to give you a real sense of Korean traditional performing arts, so please take a look!

This 40-minute concert features performances of pansori (a solo oral performance that mixes singing, speaking, and gesturing to the beat of a drum), salpuri (a shamanic dance from South Jeolla Province featuring a dancer waving a white cloth to a sinawi ensemble), janggu chum (an energetic, improvised performance using a traditional percussion instrument called a janggu) and more. 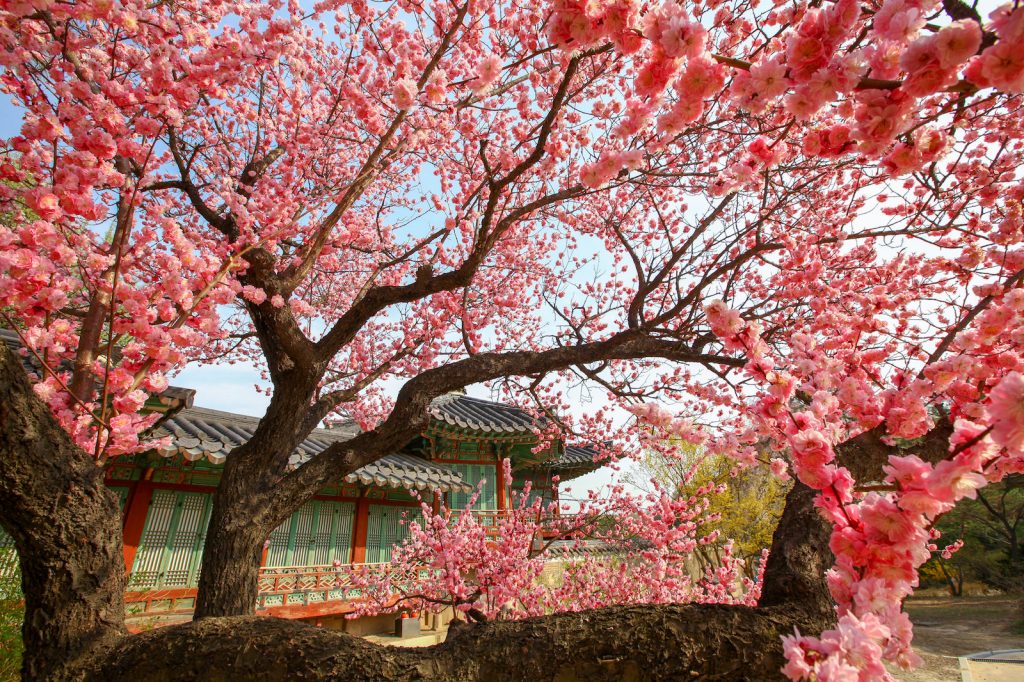 What did you think of our music journey to South Korea? There are still many more places to go! Please look forward to our next destination.

(Produced in collaboration with the Korean Cultural Center in Tokyo and the Korea Tourism Organization, who also provided photos.)