Welcome to the fourth edition of Min-On’s Music Journey! In this installment, let us guide you to the Republic of Turkey, a crossroads of Eastern and Western civilization that shares a border with Asia, Europe and Africa.

The Ottoman Empire, predecessor of the Republic of Turkey, was founded in about 1299, and its prosperity lasted for 600 years. As a result, a diverse, flourishing culture developed, with many traditions that are still alive today.

Turkish military marching bands, called mehterhane (or mehter in modern Turkish), developed in a unique way. These musical units inherited the drum music of the Turkish people of Central Asia together with the traditional music of West Asia. Mehterhane performed in court ceremonies and became known to every nation in Europe after they accompanied the Turkish army to raise morale on an expedition to Europe. Elements of Turkish military bands were incorporated in pieces including Haydn’s Symphony No. 100 (Military Symphony) and both Mozart’s and Beethoven’s Turkish March. 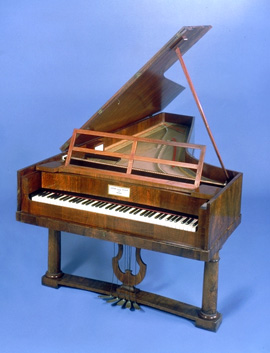 This piano has a “Turkish pedal” for playing bells and drums. It became a favorite of many composers such as Chopin, Schumann and especially Beethoven in his later years.

Turkish pedal
Among the five pedals, the one on the far right is the Turkish pedal. Stepping on it rings the bell built into the piano case, and produces a percussive sound by striking the soundboard with a drumstick.

Turkish cuisine is one of the most prominent culinary traditions in the world. Its defining traits include meat dishes centered on the most popular meat in Central Asian cuisine, mutton; dishes using seafood from the Mediterranean Sea and olive oil; and diverse ingredients, flavors and techniques that come from a fusion of East and West. Some Turkish cuisine is even included in UNESCO’s list of intangible cultural heritage items.

Turkish coffee is traditionally brewed by putting finely ground coffee and sugar in a small, dedicated pot called a cezve and boiling it directly over high heat.

Turkish ice cream, or dondurma, is famous even in Japan. It includes Salep (the powdered bulb of a type of orchid), which makes it extremely stretchy and resistant to melting.

Istanbul is Turkey’s largest city, with a population of over 15 million people, and it is the economic, cultural and historical center of the country. Since ancient times, it has prospered as the capital of a great nation. In 1985, The Historic Areas of Istanbul were registered as a World Heritage Site by UNESCO. The Topkapı Palace is located on a hill surrounded by the Bosporus Strait, Sea of Marmara, and the Golden Horn. Nearby are other important buildings such as the Hagia Sophia, originally constructed as a cathedral for the Greek Orthodox Church. It was later converted into a museum, and today it is a mosque that receives many visitors.

The Bosphorus Strait is ranked among the world’s most beautiful straits. It separates Istanbul into an Asian side and European side, and connects the Black Sea in the north and the Sea of Marmara in the south. The strait is very popular with tourists, both domestic and foreign, who visit to take in its gorgeous scenery. (The name “Bosphorus” means “cattle passage.”)

Cappadocia, located in the Anatolian Plateau of central Turkey, has been featured prominently online and in social media in recent years. The lava beds and volcanic tuff deposited here by volcanic eruptions have eroded over many thousands of years. Cappadocia is also a registered UNESCO Word Heritage Site, and features churches, monasteries and underground cities built in the caverns during the 7th to 13th centuries.

To date, Min-On has presented many genres of Turkish music and dance, including three of our Musical Voyage along the Silk Road concerts, a concert by Turkish singer Barış Manço, concerts by Turkish pianists Gülsin Onay and Fahir Atakoğlu, and more.

Please enjoy the following performances of the Turkish Traditional Culture and Art Ensemble, from the 1997 Musical Voyage along the Silk Road, 10th Installment: Pathway to the Distant Future.

3. Dance of Erzurum: The Knife Dance

5. Horon of the Black Sea

In closing, we would like to introduce several songs recommended by Cultural and Information Counselor Kaan Yılmaz of the Embassy of the Republic of Turkey in Japan.

We hope you will enjoy the performance of three traditional songs that have been passed down from ancient times in Turkey. The songs are performed by Çukurova Devlet Senfoni Orkestrası (The Çukurova State Symphony Orchestra) and soloist Murat Salim Tokaç (General Director of Fine Arts of the Turkish Ministry of Culture and Tourism). The songs can be found on their CD, Senfoni ile Saz Eserleri (Collection of Symphonies for Saz). This national orchestra was established under the Department of Fine Arts of the Ministry of Culture and Tourism in 1988. They tour major domestic concert halls in their home country, as well as Cyprus, Syria, Germany, Azerbaijan, Japan and more.
The orchestra has garnered a great reputation at their concerts, where they perform a diverse repertoire, including classical music, Turkish music, pop music, musicals and film music.

Did you enjoy our music journey to the Republic of Turkey? We still have many destinations left. Please look forward to them!