Min-On Music Journey No. 32: The Republic of Peru 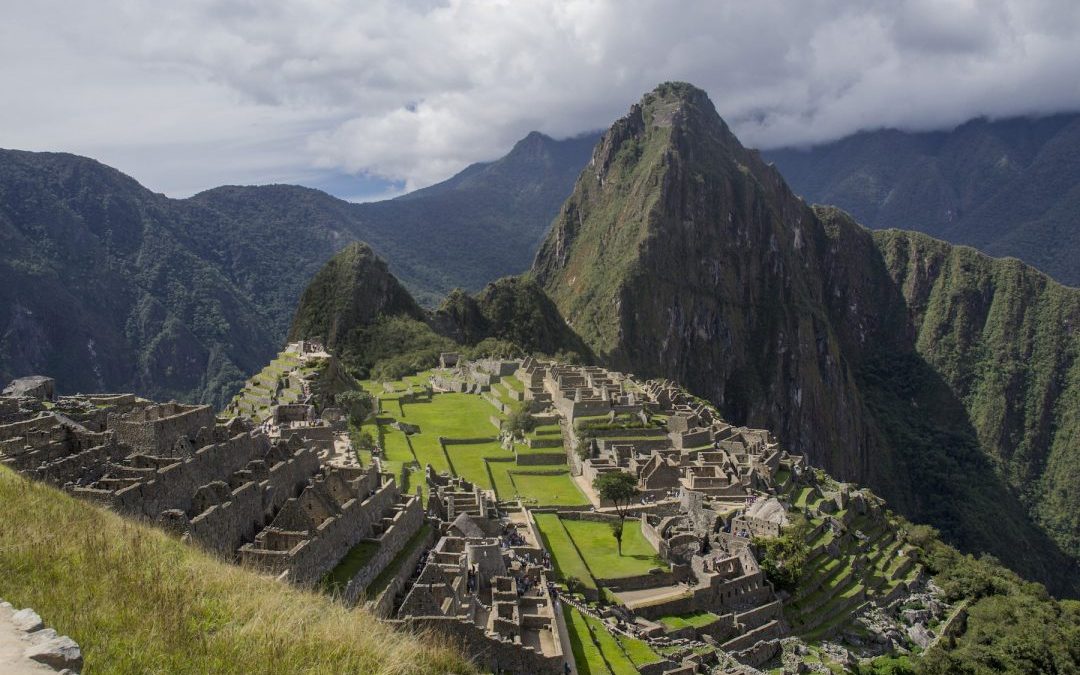 Welcome to Min-On’s Music Journey! Today, the Min-On Concert Association and the Embassy of Peru in Japan welcome you to the Republic of Peru in western South America, where one of the world’s largest ancient civilizations once flourished.

Peru faces the Pacific Ocean to the west and borders Ecuador, Colombia, Brazil, Bolivia and Chile. It contains three regions of differing terrain and climate that each have their own unique culture: the desert near the Pacific Ocean (Costa), the Andes mountains in the center (Sierra) and the tropical rainforest and upstream Amazon river in the east (Amazonia).

Lima, a capital alive with old and new

The capital of Lima is a metropolis in the arid Costa region that lies along the Pacific Ocean. It is the political and economic center of Peru and is home to about 30% of the country’s population of 7.74 million people.

The modern Miraflores District has many parks, symbolic monuments and many other outdoor works of art. Outdoor cafes, restaurants, brand-name shops and hotels also line the streets, giving the district a bustling metropolitan charm.

The Park of Love sits at the edge of a cliff and offers a panoramic view of the Pacific Ocean and Lima Bay, making it one of the capital’s most popular places. The park is open all day, allowing visitors to savor the view of the vast sky dyed orange at twilight and the ocean gleaming under the setting sun. You can also paraglide nearby and enjoy a resplendent aerial view of the city. 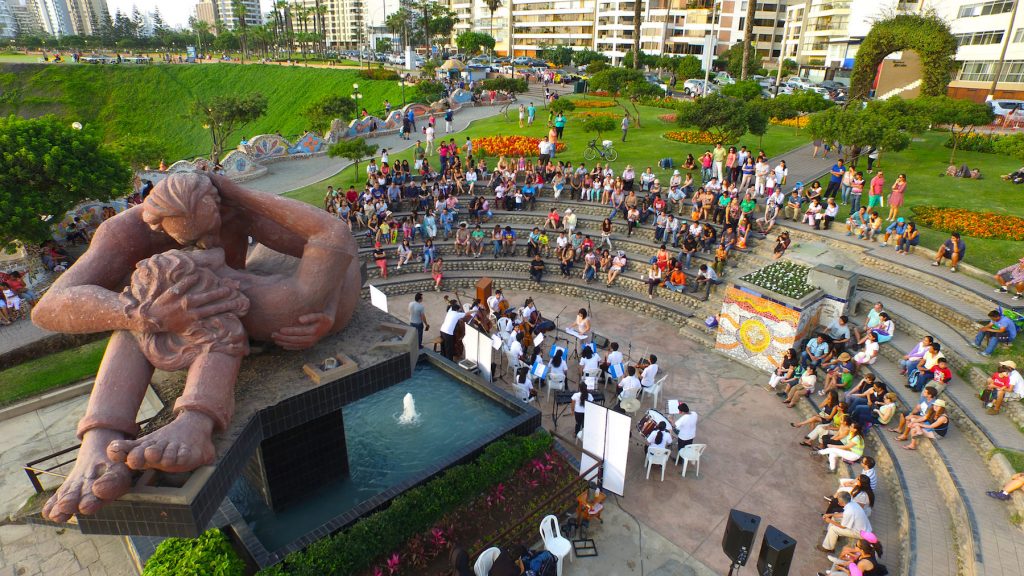 The historic center of Lima is lined with old buildings from the Spanish colonial period. These buildings still vividly preserve the prosperous 17th century colonial atmosphere. UNESCO registered the Historic Centre of Lima as a World Heritage Site in 1988.

Francisco Pizarro, the Spanish conquistador famous for conquest of the Incan Empire, built the Plaza de Armas in the center of the district, said to be the oldest plaza in Lima. Important historical structures like the Government Palace and St. Francis Cathedral and Monastery are also located near the plaza, making it one of Lima’s most popular sightseeing destinations. 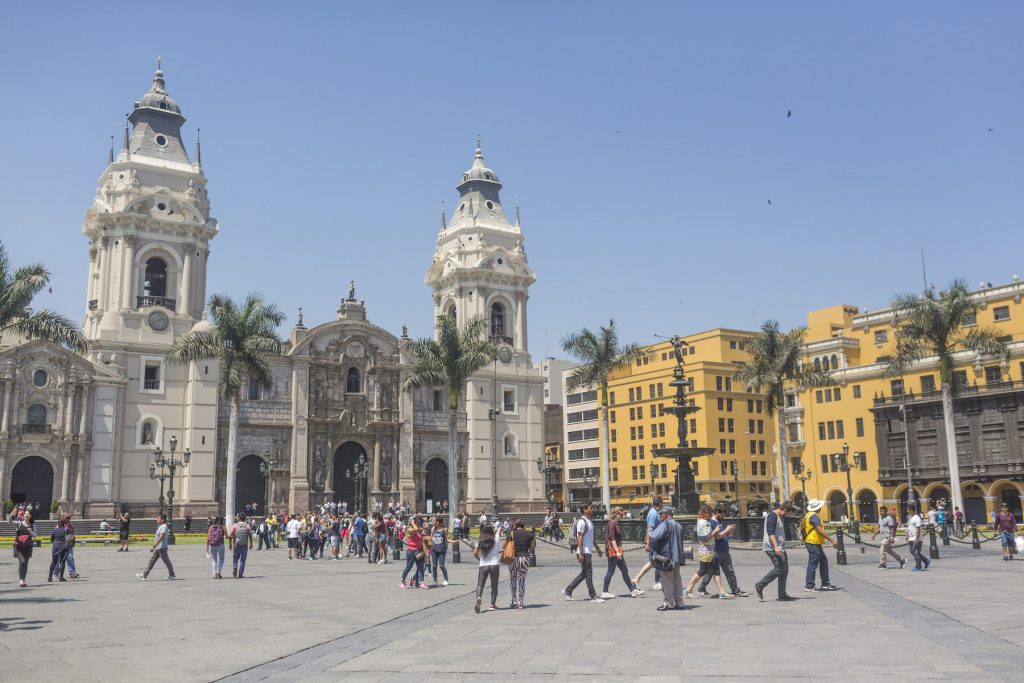 The ruins of Machu Picchu perch atop a mountain at an elevation of 2,280 meters—so high they can’t be seen from the foot of the mountain. The city’s gigantic stone blocks have no mortar, and the site is shrouded in still-unsolved mysteries, such as where the blocks came from, how they were transported and the construction process. The Incas built this mountaintop settlement in the 13th century as an important holy city, and it slept quietly for 400 years until American historian Hiram Bingham III discovered it in 1911. About half of the city’s five square kilometers are terraced farmland built on the slopes of the mountain. Machu Picchu stirs up romanticism in its visitors through sights including the residential area where its people lived, its gracefully curved Temple of the Sun and its sophisticated water supply system. UNESCO registered the Historic Sanctuary of Machu Picchu as a World Heritage Site in 1983.

The Nazca Lines carved into the arid plains of southern Peru are another ancient mystery of Peru. The lines include over 700 geometric designs and figures resembling plants or animals. Historians believe the Nazca civilization created these designs during the 2nd to 7th centuries BC, but they would have needed advanced measurement techniques and mathematical knowledge—how they created them is still unclear. The climate of this arid region, with very little wind or rain, has allowed these designs to survive through the ages. UNESCO registered the Lines and Geoglyphs of Nasca and Palpa as a World Heritage Site in 1994. 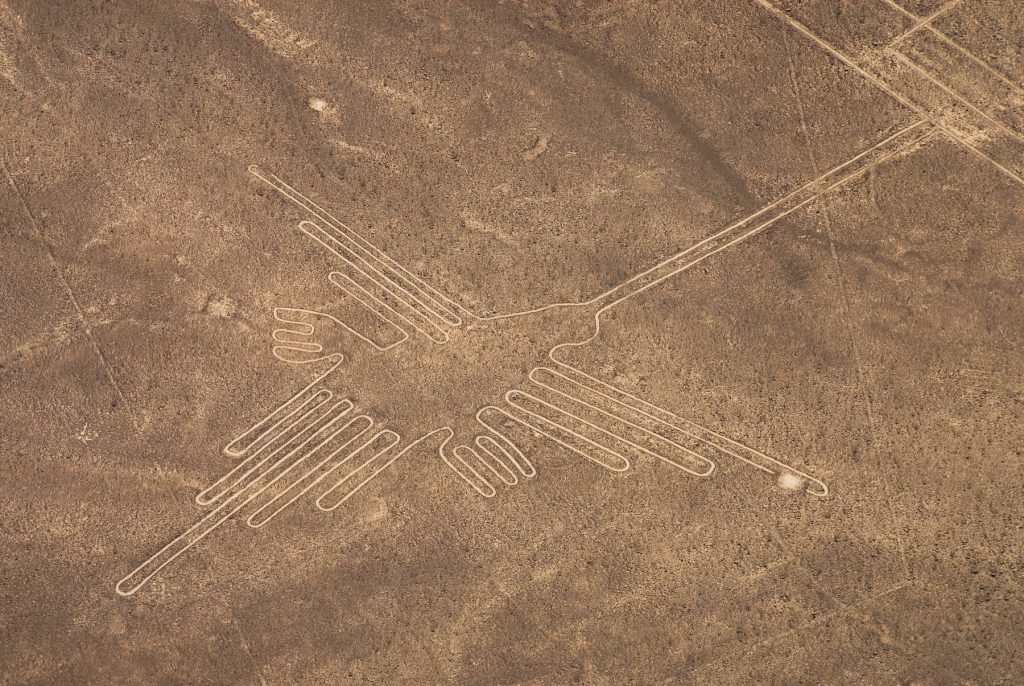 A country rich with natural beauty

The Amazon River is fed by melted snow from the Andes Mountains and flows through the tropical Amazon Rainforest that covers over half of Peru. Over 1,000 species of animals and 965 species of plants live here. The Amazon River serves as the source of life for the region, supporting one of the world’s most important ecosystems. The Pacaya-Samiria National Reserve is the second largest in Peru and is considered the most primeval area in the Amazon River Basin. Visitors may have the chance to see rare animals like anacondas, sloths, pink river dolphins, tarantulas and more on cruises offered here. Visitors might even encounter the aboriginal peoples who live in the jungle.

The colorful slopes of Mount Vinicunca recently grew popular on social media and are a new top tourist spot in Peru. The many colorful layers of mineral oxides in the soil resemble a rainbow, earning it the nickname Rainbow Mountain. Hikers can encounter wild llamas and vicuñas, alongside grazing sheep and alpacas, along the arduous 10-kilometer-long trail to its peak over 5,000 meters above sea level. 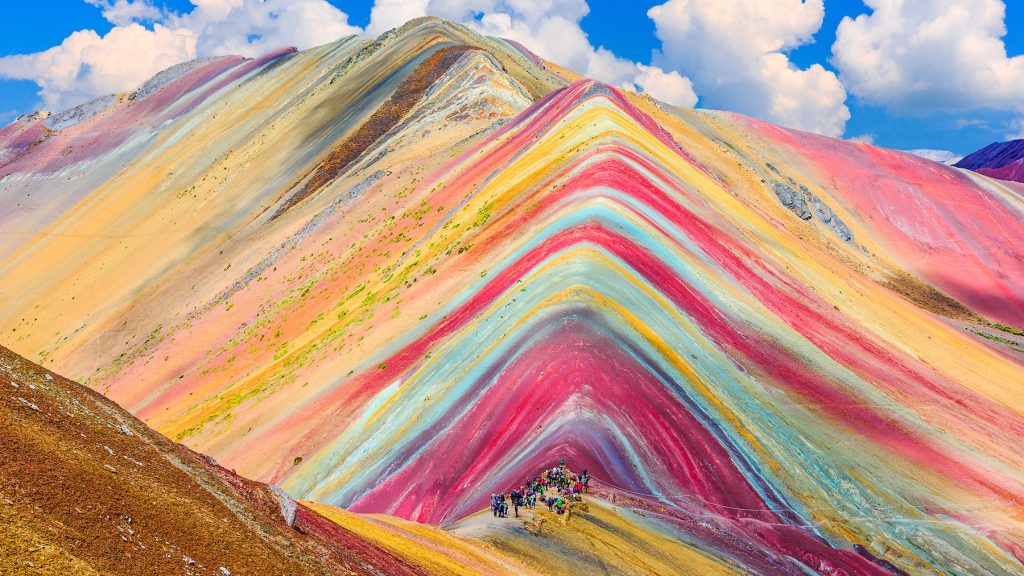 Lake Titicaca is a freshwater lake spanning Southern Peru and western Bolivia and is one of only 20 confirmed ancient lakes (lakes over 100,000 years old) in the world. It is about 12 times bigger than Lake Biwa in Japan and contains 41 islands of different sizes. Isla del Sol is perhaps the most famous. Legend says the first Incan emperor and his sister came to Earth on the island, making it the home of the Incan creation myth. Indigenous peoples have lived in the area since before the time of the Incas, and some tribes still live here today. 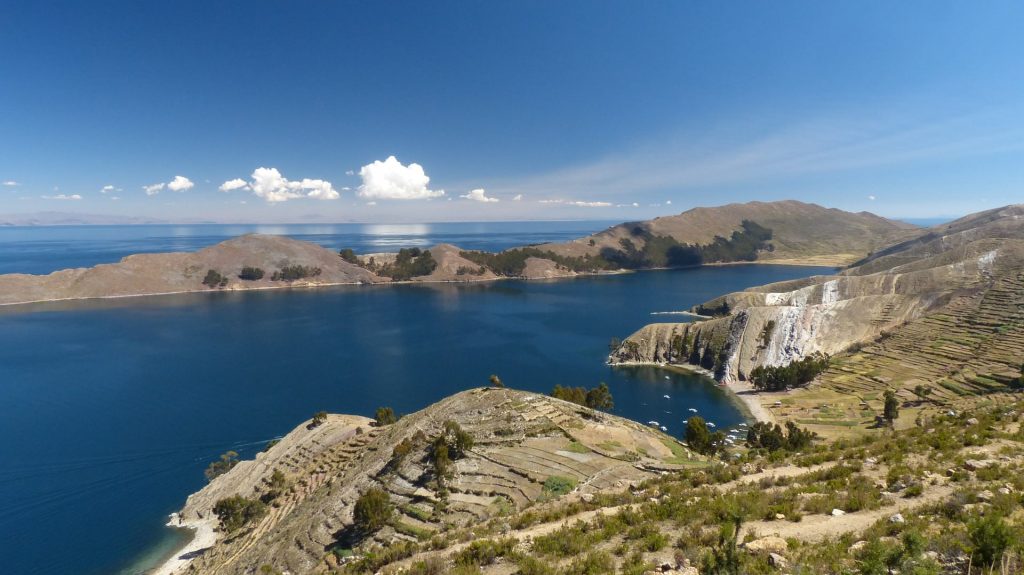 The nearby Uros Islands are a series of 60 man-made islands made entirely of bundled reeds called totora. Because the islands usually float on the surface of the lake, their inhabitants secure them with ropes to keep them from drifting away. The houses, schools, boats and churches on the islands are all made of totora, drawing visitors from all over the world to enjoy this rare sight.

Puno lies on the shores of Lake Titicaca at an elevation of 3,827 meters in southern Peru. It is famous as the folkloric capital of Peru and has about 300 different folk dances. Every February, Puno holds the Fiesta de la Candelaria. This event honors the statue of the Virgin of Candelaria brought by the Spanish in the 16th century. On the festival’s final day, thousands of dancers and musicians parade in colorful costumes along a 5-kilometer route through the city carrying the statue. 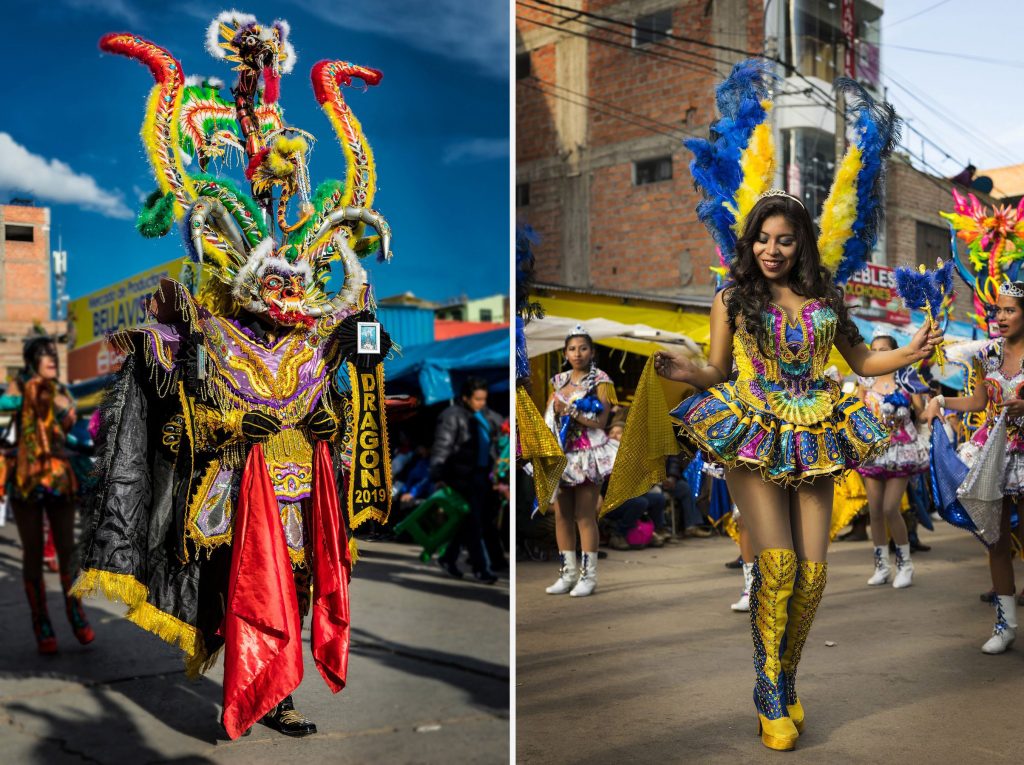 Inti Raymi is known as one of three great festivals in South America alongside the Carnivals in Rio de Janeiro (Brazil) and Oruro (Bolivia). It is held every year on June 24th (winter solstice) in Cusco, a World Heritage site that was once the capital of the Incan Empire. Inti means “sun” and raymi means “festival” in the Quechua language. Festival-goers offer thanks to the sun god for the previous year’s harvest and pray for an abundant harvest in the next. The 200 official events involve over 800 colorful performers, and over 120,000 visitors gather from across the globe to view the festival. The whole town brims with the excitement of the festival, including other events like ethnic dances and concerts, presentations, food tastings of Cusco’s local cuisine and fashion shows of traditional clothing. Because Peru has many ethnic groups, it has had many different forms of traditional clothing since ancient times. The traditional dress of the Quechua and Aymara peoples who live in the Andean Plateau is easily recognizable for the hat atop braided hair, shawl over the shoulders and full, colorful skirt. They make the cloth from insulating llama or alpaca wool, and the designs vary highly according to village and region.

Among Peru’s many folk dances, the marinera is beloved as the national dance in the coastal region. The version called the marinera norteña is an elegant dance that features the female dancer waving her long, lacy skirt.

Min-On hosted the A New Legend of Peruvian Music concert in 2011. Please enjoy this passionate performance filled with powerful voices and the sound of the cajón, an Afro-Peruvian percussion instrument.

Mac Salvador began winning competitions at a young age and is incredibly popular in the Andean music world. He is originally from Nazca, which is famous for its geoglyphs. He is a legendary singer in modern Andean music, having performed in cities like Ayacucho, Cusco, Arequipa, Ica and Lima. He is known for his unusually sweet, effeminate voice, and his wistful melodies resonate even with overseas listeners.

A group of young cajón players, dancers and thespians officially formed this band in April 2008. They have continued to grow in popularity since then, and they now perform in festivals both in Peru and abroad. Their performances that weave together dancing and cajón performance are must-see.

Appointed by the Peruvian government as the Ambassador of the cajón, this master of global music reaches all over the world with his concerts and recordings. Cotito’s album Lamento Negro featuring iconic criollo and Afro-Peruvian music singer Susana Baca won a Latin Grammy Award for Best Folk Album in 2002. Her voice resonates from the depth of her heart, and combines with the simple yet exquisite cajón sound to create quintessential Afro-Peruvian music.

Musicians recommended by the Embassy of Peru

In closing, we would like to highlight Chabuca Granda, a musician recommended by the Embassy of Peru to Japan.

The late Chabuca Granda was a world-famous Peruvian composer who used her extraordinary artistic sense as a singer-songwriter to create over 100 songs about Peruvian folklore and history. In her long career as a composer, she incorporated rhythms including those from the tondero, Creole waltz and Afro-Peruvian music. The Peruvian government declared her music Cultural Heritage of the Nation in 2017 and posthumously awarded her Peru’s highest honor, the Order of the Sun, in 2019. This is Chabuca Granda’s most iconic song and a quintessential example of Peruvian Creole music.

This song is a rerelease of one of the most popular collaborations between Chabuca Granda and Óscar Avilés. Guitarist Sergio Salas and Juan Diego Flórez provide accompaniment, and Sinfonía por el Perú produced the record. The oasis town of Huacachina, filled with restaurants and resort hotels

What did you think of your music journey to Peru? There are still many more places to go! Please look forward to our next destination.